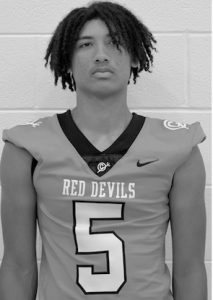 The Laurens County Touchdown Club is proud to announce that for games played on November 25th, the Player of the Week is Junior Tight End and Defensive End Kadon Crawford of Clinton High School.

Crawford had six tackles on the night, two tackles for loss and one sack on the night in the 27 – 14 loss to Powdersville in the AAA Upper State Championship game Friday night.

Head Coach Corey Fountain states, “Kadon is a great young man who works exceptionally hard.  I love his physical style of play!  We usually see him getting noticed for his blocking, however, this past Friday he did a great job on the defensive side of the ball as well.”

The Laurens County Touchdown Club also would like to announce that the Postseason Awards Banquet has now been moved to a new date. The Year End Banquet will now be Wednesday Night January 11, 2023.

The Laurens County Touchdown Club meets every other Thursday throughout the football season at The Ridge located in Laurens at 301 Exchange Road. The Ridge will once again be the host of the Season Ending Awards Banquet that honors the student athletes for their accomplishments throughout the year. The TD Club will be announcing the All-County Team and the TD Club’s Player and Coach of the year at the Banquet. Tickets can be purchased at the door for $20 for the Banquet. The Banquet will start on January 11th at 7 pm.