The orchestra is quiet, as winter holds the conductor’s baton. Still, a song comes to mind. “California Dreamin” where much is brown and gray—every shade of brown and gray you can imagine. Yet, if you know where to look, you’ll see fluorescent green aquatic plants and British soldier lichens wearing red.

That orchestra? Amphibians, insects, and birds await spring’s great revival when the air will echo with reverberant song.

On a cold January day, Wambaw Bay flexes its winter beauty. Once again I have come to a bay some say is among the more beautiful. Robert Clark, Taylor Main, and I are here to shoot footage for a video feature and PBS TV program. We spend several hours in the bay taking in its winter beauty. We’re happy to escape the city and its noise, confusion, and cement-asphalt abhorrence. 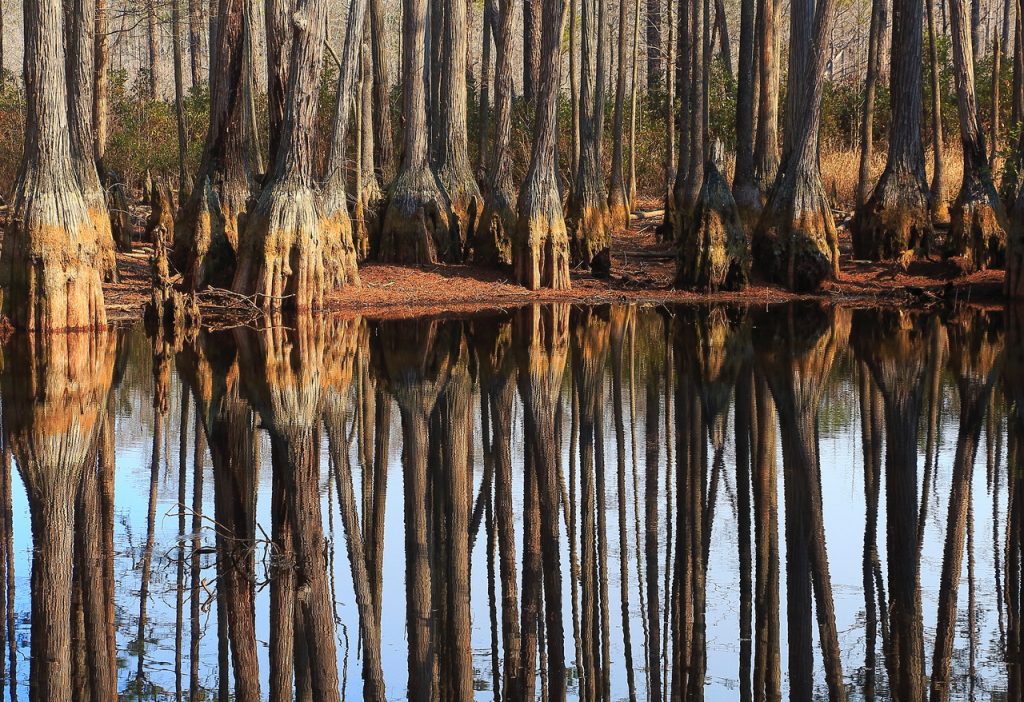 A day later I’ve returned to civilization, and yesterday’s journey seems a dream. I’m reflecting on all we saw. We visited the bay’s limesinks, features giving rise to the bay’s other name, Florida Bay. Winter rains fill the limesinks. Full, too, of blue sky, they reflected the buttressed trunks of cypresses. Even in winter’s chill, blue corridors of sky ran through green patches of water.

We saw what some term the “mother tree,” a withered living cypress some 400 years old. It looked a bit surreal, ghostly, but from it many have followed.

We wandered through buttressed cypresses out into the bay’s savanna, which looked like a field of wheat thanks to high grasses dressed in winter gold. Here and there stood cypresses with wind-twisted tops. Naked to the sky, they revealed the intricacies of their branches. One outlier looked like a comet streaming through the tree. Below the limbs, well-worn deer paths carved alleys through grasses as if anacondas, not deer, had glided through. In warmer seasons to come perhaps there’ll be grass pink orchids that look like butterflies and yellow-fringed orchids. 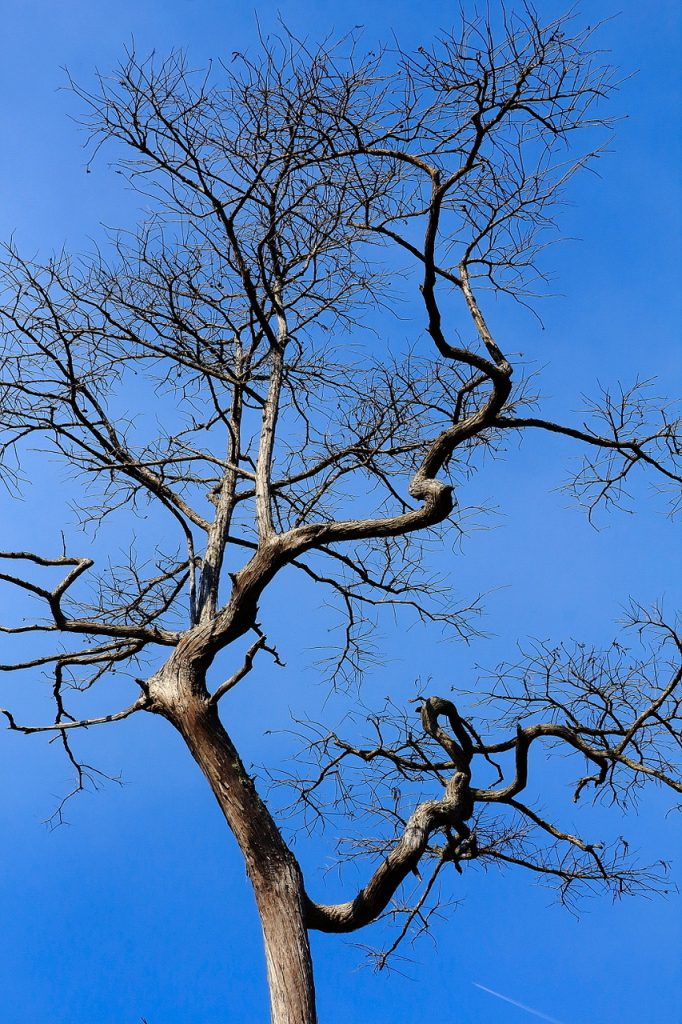 Colonies of withered pitcher plants sleep until spring’s alarm will signal them to again become death traps to insects seeking nectar. Unlike spring and summer when they’re vibrant and multihued, the pitcher plants have given up the ghost. When I touch them they rattle like paper.

The whole time we were in the bay the only signs of civilization we saw were a distant fence and far more distant silver needle in the sky. An airliner flew over the Francis Marion National Forest. And that’s what I love about the more secluded, pristine bays. Little signs of man’s meddling save the occasional shotgun shell.

It was beautiful but we were cautious. Walking among cypress knees took some skill. Soggy earth made the feet slip. To fall upon a knee would not be a lot of fun, but seeing the bay in cold season glory was.

When the drone approached it sounded like hornets. I’ve been stung here. Wasps. That’s another nice thing about winter in a bay. No ticks, wasps, or mosquitoes. And no people other than we three.

People talk about how peaceful and quiet nature is but that isn’t true. Walking into a Carolina bay you will hear hawks cry, doves coo, and quails whistle. When you stand in a bay’s savanna, birdsong is a 360° experience. Chest-high broom sedge carpets the bay. Bladderworts bloom. And wildflowers flourish. It’s the arena of butterflies and dragonflies. But that is in the summer.

Now it is winter. As spring approaches, the bay will awaken from its winter slumber. Spring will bring wildflowers and summer will be hotter than the devil’s kitchen. Now, however, it’s cold and windy. Winter in Wambaw Bay. It has its own charm. It’s own beauty.