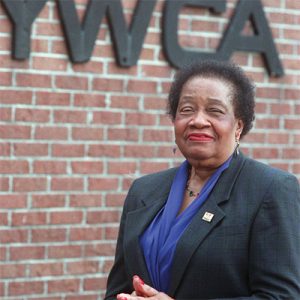 The multi-day tribute’s theme will be “We Persist: Paving the Path to Justice.”

“More than 50 themes were submitted for our 50th Annual MLK Celebration,” says LaVanda Brown, executive director of YWCA Greater Charleston. “It was a difficult task to choose just one. We chose it because it continues to charge us with the responsibility to turn Dr. King’s dream into action. And while we have persisted for 50 years to honor his legacy, it reminds us that we must continue to persist in order to pave the way to racial and social justice, which are still urgently needed today.”

Traditionally the penultimate event of the annual MLK Celebration, the Reverend Dr. Martin Luther King, Jr. Federal Holiday Parade will cap off the Celebration this year. Due to COVID, it will be a live pre-recorded parade, with the traditional media stand, live commentary by TV anchors, and floats, walking groups, motorcycles, bands and the like gathering downtown to line up following the tradition of previous years. The pre-recorded parade will be televised by WCBD News 2 at noon on MLK Day, Monday, January 17.

To commemorate the 50th year of the Celebration, Ms. Jackson, executive director emeritus of YWCA Greater Charleston, will serve as parade marshal.

She was the first cousin of Coretta Scott King, wife of Rev. Dr. Martin Luther King, Jr. Together with YWCA Greater Charleston’s members and board at the time, the two marched in the historic 1969 MUSC hospital strike. In addition to spearheading many highly effective programs and events designed to empower women and eliminate racism, in 1972, Ms. Jackson founded the annual MLK Celebration, one of the first MLK tributes in America. Over the years she added more events to the celebration, beginning with the annual MLK Ecumenical Service and ending with the annual MLK Business & Professional Breakfast (now called the MLK Summit) in 2000.

Organizations can sign up now to sponsor the 2022 MLK Celebration online at ywcagc.org/mlk or by emailing [email protected]g.

The 50th Annual Reverend Dr. Martin Luther King, Jr. Celebration is one of South Carolina’s longest running events, predating Spoleto Festival USA and other well-known local events. The annual celebration was founded by YWCA Greater Charleston and first held in January 1972—one of the first such tributes to Dr. King in the nation. The Annual MLK Summit (Breakfast) was added in January 2000 in partnership with former Charleston Mayor Joseph P. Riley, Jr. and the City of Charleston. Today the celebration is the largest and longest running tribute to Dr. King in South Carolina, attracting thousands of celebrants each year.

For 114 years, YWCA Greater Charleston has worked to eliminate racism and empower women in Charleston, Berkeley, and Dorchester Counties. Among its initiatives to eliminate racism are its multi-day MLK Celebration, one of the city’s longest running events; its annual Stand Against Racism; and its Racial Equity Institute trainings equipping local leaders to address racism. It empowers women with its annual What Women Bring event, attended by hundreds to empower South Carolina’s women in business, community, and culture; WE 360°, helping women of color overcome barriers in entrepreneurship; Own the Room public speaking workshops empowering women’s success; and women’s health programs. It brought the first Girls Who Code club for middle school girls to Charleston, and today its Y Girls Code program includes female students of all ages. It also hosts SheStrong, empowering high school girls to develop as leaders and changemakers. For more information, visit ywcagc.org.