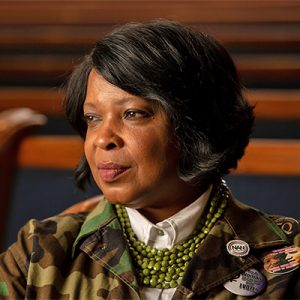 Trudy B. Lucas will receive the Harvey Gantt Triumph Award at the Celebration’s MLK Ecumenical Service on Sunday, January 16. Also a hybrid virtual and in-person event, it will be live-cast at 4:00 p.m. from Charleston’s Greater St. Luke AME Church.

The longstanding honor is named for Harvey Gantt, the first African American student admitted to Clemson University and the first Black mayor of Charlotte, N.C. It recognizes an individual who confronts societal prejudice and bigotry of any kind; adheres to principles of justice, equality, civility, and mutual respect; advances the common well-being of society; builds communication and understanding among diverse peoples; affects innovative and positive change, thought, learning, and/or activity; and inspires others to pursue these goals.

Ms. Lucas, the manager of religious affairs and external relations of the National Action Network (NAN) under Rev. Al Sharpton, manages the advancement of NAN’s advocacy goals in human and civil rights by mobilizing influential faith-based organizations, fraternities and sororities, organized labor, and professional associations. Prior to joining NAN, she was recruited by Rev. Nelson B. Rivers, III to serve as manager of stakeholder relations for the National Association for the Advancement of Colored People (NAACP).

An energetic and widely respected advocate for social justice and equity in South Carolina who serves as a “go-to” person for rallies, demonstrations, grassroots campaigns, and more, she has been on the leading edge of some of the most important and iconic moments in the U.S., South Carolina, and Charleston. She was an integral part of NAN’s response to the Mother Emanuel shooting and the removal of the Confederate battle flag from the South Carolina State Capitol. She served as an ambassador for the documentary EMANUEL, ensuring it was viewed in communities across the nation, and was responsible for 1,500 volunteers during the historic 2020 National Action Network March on Washington, attended by more than 250,000 people.

“Trudy Lucas is a quiet storm, in my opinion,” said LaVanda Brown, executive director of YWCA Greater Charleston. “She is a changemaker and modern-day social justice warrior. She is the woman behind the modern movement in so many ways. It is a privilege to honor her work.”

Thaddeus Bell, M.D., D.H.L., will receive the Joseph P. Riley, Jr. Vision Award at the Celebration’s 22nd Annual MLK Summit on Thursday, January 13. A hybrid virtual and in-person event, it will be live-cast at 7:00 a.m. from the Camden Room of the Charleston Area Convention & Visitors Bureau.

Recognizing model corporate citizenship, the annual award is named for Mayor Joseph P. Riley, Jr., who served as mayor of the City of Charleston from 1975 to 2016. It recognizes an individual, corporation, or institution who achieves outstanding and favorable recognition in their field or industry; promotes diversity and equal opportunity through policy, business practice(s), and/or advocacy; contributes positively to the growth of the Charleston metropolitan business market; and advances the common well-being of society through community service and/or other acts of charitable goodwill.

Before going into medicine, Dr. Bell began his career as a schoolteacher in Gaffney, S.C., where he was the first African American to teach at an all-white high school in the state.

In 1980 he co-founded the Elijah Wright: Cross Family Health Center, a free clinic for the underserved in Cross, S.C., where he was the only physician for 10 years. He went on to serve as a physician at the Ralph Johnson Veteran Hospital in Charleston, and then to enter private practice in family medicine in North Charleston. While in private practice he served as a medical consultant to the Charleston and Berkeley County Jails and medical director of the Fenwick Hall Drug & Alcohol Abuse Treatment Center. He has also served as a sports medical consultant to the U.S. Olympics Committee at the Olympic Training Center in Colorado.

He holds distinguished degrees from South Carolina State University and the Medical University of South Carolina, and earned a master’s degree from Atlanta University in addition to graduating from the School of Aerospace Medicine. He also holds a Doctor of Humane Letters degree, an honorary degree awarded to those who have distinguished themselves through humanitarian and philanthropic contributions to society.

“Dr. Bell is committed to providing valuable healthcare resources to the community with a determined focus on underserved populations,” said Kendra L. Snipe, board chair of YWCA Greater Charleston. “He has set the table for future generations pursuing careers in the medical field and we honor him for paying it forward.”

Tickets to the 2022 MLK Summit and MLK Ecumenical Service will be available online at www.ywcagc.org on Monday, January 10. Both events are open to the public.

The 50th Annual Reverend Dr. Martin Luther King, Jr. Celebration is one of South Carolina’s longest running events, predating Spoleto Festival USA and other well-known local events. The annual tribute was founded by YWCA Greater Charleston and first held in January 1972—one of the first such tributes to Dr. King in the nation. The Annual MLK Summit (Breakfast) was added in January 2000 in partnership with former Charleston Mayor Joseph P. Riley, Jr. and the City of Charleston. Today the Celebration is the largest and longest running tribute to Dr. King in South Carolina, attracting thousands of celebrants each year.

For 114 years, YWCA Greater Charleston has worked to eliminate racism and empower women in Charleston, Berkeley, and Dorchester Counties. Among its initiatives to eliminate racism are its multi-day MLK Celebration, one of the city’s longest running events; its annual Stand Against Racism; and its Racial Equity Institute trainings equipping local leaders to address racism. It empowers women with its annual What Women Bring event, attended by hundreds to empower South Carolina’s women in business, community, and culture; WE 360°, helping women of color overcome barriers in entrepreneurship; Own the Room public speaking workshops empowering women’s success; and women’s health programs. It brought the first Girls Who Code club for middle school girls to Charleston, and today its Y Girls Code program includes female students of all ages. It also hosts SheStrong, empowering high school girls to develop as leaders and changemakers. For more information, visit ywcagc.org.