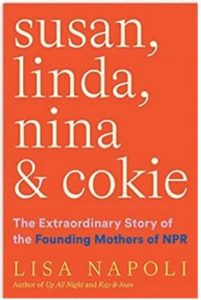 This book is the story of four women from vastly different backgrounds who converged on a fledgling radio network in DC in the mid-1970s. Susan Stamberg, Linda Wertheimer, Nina Totenberg and Cokie Roberts built the backbone of the early National Public Radio while they also whacked away at the broadcast industry’s glass ceiling.

The author, Lisa Napoli, lays out these journalists’ diverse upbringings at the beginning of the book with a biographical account of each that foreshadows their ultimate intersection at NPR. The narrative of how these women reported the news overlays with the stories of how they questioned the broadcast establishment and managed high-power careers while juggling marriages and child rearing – none of which were typical for women in the early ‘70s.

The author also tells the human side of their friendship spanning almost 50 years. There are stories that illustrate their support for each other, their love for each other’s families and their genuine friendship. The narrative is interspersed with the tales of powerful politicians, gender inequality and the changing face of journalism.

Admittedly, I’m a long-time NPR fan girl ever since I discovered WAMU, the NPR affiliate in DC, when I was a young Hill staffer in the early 1980s. Little did I know as I tuned in to Morning Edition and All Things Considered daily that I was listening to history being made – and I don’t mean just the history these four journalists reported on. This book is their history, and the author does a beautiful job to parallel these journalists’ individual stories and struggles with the historic events in their news reporting.

I also found the backstory of NPR’s bumpy rise to relevance particularly interesting. I thought I knew a good bit of this history from my years of association with SCETV and SC Public Radio, but this book made me realize how little I know of how NPR came to be. This book is an easy read that illustrates not only how far we’ve come in terms of women in broadcasting but it also reminds us that there are real people behind those microphones.

Although Cokie died in 2019, Nina, Linda and Susan remain on NPR almost 50 years after they first met in a tiny radio studio in DC. Here’s a great NPR interview with the three surviving “mothers” from last May.

Reba Hull Campbell is president of the Medway Group, a big word nerd and avid summertime reader. This is part of her summer reading discipline to get off the screen and back to books in a dozen or so “Blink Book Reviews.” She’s challenging herself to keep them to 300-ish words so readers can skim them in a couple of blinks. Reach Reba at [email protected]. Read previous reviews at Random Connect Points.