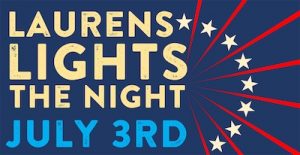 The City of Laurens will ‘blaze’ a new trail on the night of July 3rd with “Laurens Lights the Night” as it seeks to become a regional destination for the Upstate to celebrate Independence Day.

For years, the City has hosted its annual “Riverfront Freedom Festival” on the eve of July 4th along the banks of the Little River which flows through downtown Laurens.  The celebrations have featured performances by local musicians before crowds gathered in the City Amphitheater to watch fireworks just after dark. Many residents expressed a desire for a new and more entertaining way to celebrate Independence Day.  So this year, the City of Laurens is shaking things up in a major way.

On the night of Saturday, July 3rd, the City will present the Upstate’s first and only light projection show as part of its public Independence Day Weekend celebrations.  According to City Parks and Recreation Director, Jason Pridgen, the closest city doing anything of this kind is Charlotte, North Carolina.  Though it is a town of roughly 9,000 residents, the City of Laurens has set the ambitious goal of becoming a regional destination for residents of the Upstate to celebrate the Fourth.

Laurens’ new light show will be projected onto the iconic building which has become synonymous with Laurens County itself, the Historic Courthouse located in the center of the Laurens Public Square.  The public is invited to gather on the north side of the Public Square to view the show and the live music performance by “Steel Toe Stiletto,” an Upstate favorite.  The performance will begin at 7:00 p.m.  In addition to the music performance and light show, the event will feature a salute to the US Armed Forces, recognition of a local veterans, and a DJ who will entertain the crowd and anyone who wants to stick around and dance after the show.  The new light show itself is set to begin at approximately 9:30 p.m.

For those who still love traditional fireworks, there is no need to fear.  There will still be an impressive display of fireworks above the town by Zambelli Fireworks.  But, for those present in the Historic Public Square, there will be the added excitement of seeing those fireworks coordinated with the new light show. 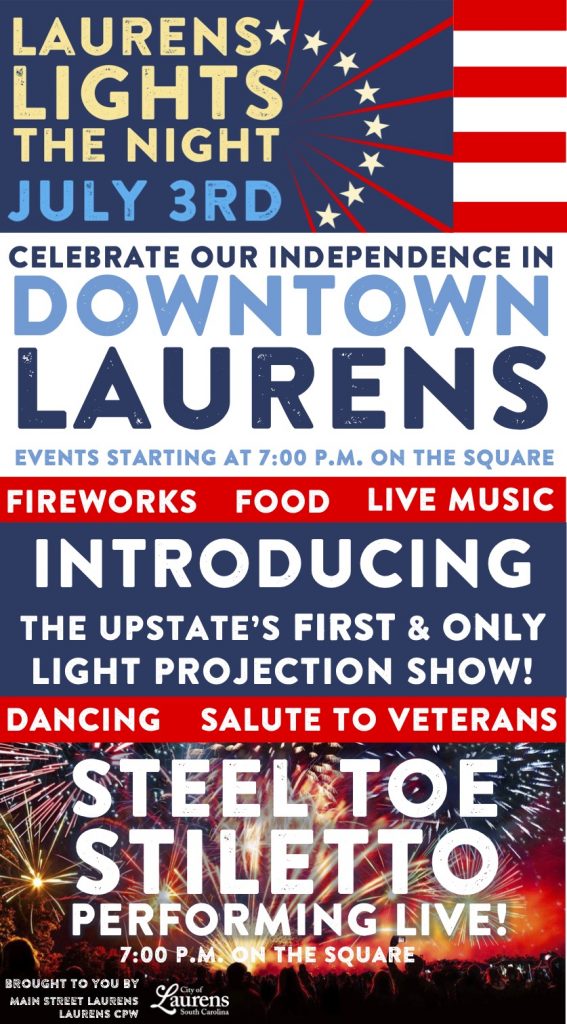 As unique as the event itself is the way the City of Laurens came to put this unique twist on its celebrations.  As a result of COVID-19, the City’s youth football program was unable to proceed last year as planned – and budgeted.  Without this program, there were funds available which would have been spent on that program which could be used for some other recreational purpose.  With the development and widespread availability of COVID-19 vaccines, coupled with a decline in infections, Laurens Mayor Nathan Senn targeted Independence Day weekend as the date when the community could look forward to large public gatherings.  So, with recreation funds available to try something new, the Mayor decided to make a one-time investment in projection equipment that will bring a new element of excitement not just to Independence Day weekend, but to a variety of other public events throughout the year.

“A major part of what excites me about this new capability is the fact that it both turned some ‘COVID lemons’ into lemonade in the way that we were creative with the use of these funds,” said Mayor Senn.  “It also represents some fiscal responsibility by taking funds which would have been spent and gone in one season of youth sports, but instead has allowed us to do something which will benefit the entire community, and which provides us with the long-term capability to hold new and exciting public events.”

“We have been really excited about this project for quite some time now, and our City staff and I have had some fun teasing the public that something new and exciting is coming on July 3rd,”  Senn added.

This new addition to the town’s celebration is also a result of community cooperation.  While the City has purchased the new digital mapping and projection equipment, the location of the projector was still an issue that needed to be determined.  After conducting some initial tests, it was determined that the best placement was high above the Square in the top floor of the Bailey Building, once the original home of Palmetto Bank (now UCBI) and which is currently being renovated by Gary Bailey, a partner at Love, Bailey and Associates, CPA, a local accounting firm.

“Without the support of community partners like Gary Bailey who has allowed us to use his building, there would have been no way to get the height and distance necessary to project across the entire Historic Courthouse,” said Senn.

The actual show design, both the digital light display and the music mixing, was also donated to the City.

With this new addition, the City hopes that its celebrations will draw crowds from all across the Upstate.  “I have fond memories of attending ‘Freedom Weekend Aloft’ with my family as a child when it was originally in Greenville,” said Mayor Senn, “and I hope that this unique event will have a similar draw, set Laurens apart, and lead folks to put us on their calendar every year.”

“I love Independence Day.  I love taking time to remember who we are and the things which unite us as Americans.  And our love of freedom, and liberty, and the blessing that we live in a country which is governed by a government ‘of the people, for the people, and by the people’ is something which should bring a smile to everyone’s face.  This new light show is just a little fun new icing on that cake.”