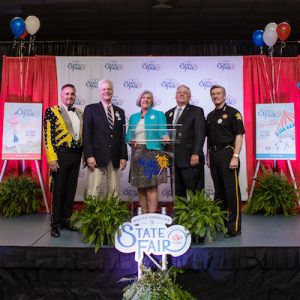 The South Carolina State Fair is adding a mix of new attractions to this year’s event in celebration of its 150th anniversary fair, which has been themed “Prized Winning Memories,” Oct. 9-20 in Columbia.

“Our State Fair is a celebration of everything that is great about South Carolina, and we are excited to put that greatness on display again during our special 150th Anniversary event,” said State Fair Manager Nancy Smith.

New this year, the S.C. State Fair will feature a free, daily circus for guests of all ages. The colorful and breathtaking show will take place under a 1,300-seat big top with live performances including high-wire artists, daredevil motorists, clowns and more. The hour-long show will take place three times daily throughout the run of the fair.

Guests will be wowed by acts such as the Globe of Death — multiple motorcyclists racing and looping in the tight confines of a steel globe — and teeterboard artists somersaulting at great heights. Other notable acts include The Pompeyo Family’s trained rescue pups, semifinalists from Season 12 of “America’s Got Talent,” and America’s Show Camels, showcasing unique blue-eyed spotted Dromedary camels. There is no additional cost for attending the circus; which is free with fair admission.

“We want to offer our patrons even more ways to enjoy the fair with their families this year, and this circus will combine a mix of the new with nostalgic entertainment that has captivated our state through the years,” Smith said.

Music will continue to play a central role in this year’s S.C. State Fair. There will be free, daily concerts in the 1,000-seat Pepsi Place arena featuring local and regional artists. Music has always been a mainstay in the S.C. State Fair’s entertainment lineup. This year, there will be a range of shows including Tokyo Joe’s Tom Petty tribute, The Restoration, a Bluegrass Day featuring Sweet Potato Pie, The Tams, a Gospel night and more.

“Our musical acts have long been an anticipated part of the fair, and we wanted to build on this tradition by widening our net to include more home-grown artists,” Smith said.

Notable features of the S.C. State Fair’s 150th anniversary include a variety of one-time exhibits and attractions:

• Brookgreen Gardens, in Murrells Inlet, S.C., home of the largest and most comprehensive collection of American figurative sculpture in the country will feature some of those works in the Cantey Building.
• A special pictorial postal cancellation stamp marking the fair’s 150th anniversary will be open for the public and stamp enthusiasts.
• A history of the S.C. State Fair, “Meet Me at the Rocket,” will be available for purchase.
Fascinating fair memorabilia will be on display.
• The fair’s iconic rocket is celebrating its 50th birthday and will be decorated throughout the 12-day run of the S.C. State Fair.

“We are always seeking ways to improve and enhance the fair each year,” said Smith. “The new attractions that prove to be most popular could be added to our list of traditional offerings in future years.”

Residents statewide can share their S.C. State Fair memories to be on display at this year’s fair. Submit photos, memories and quotes via email to [email protected]

Even with all of these new attractions and exhibits, there will be no price increases for this year’s fair. In celebration of its 150th anniversary, the S.C. State Fair aimed to increase value in each fair-goer’s experience without increasing the cost.

Since its inception in 1869, the fair has continued to promote and celebrate its agricultural roots with a mix of entertainment, food, rides and educational activities while featuring artistic and agricultural exhibits and competitors from across South Carolina.

S.C. State Fair invites the public to celebrate the 150th anniversary at noon Oct. 9, opening day, when a birthday cake will be shared with patrons.

About the South Carolina State Fair