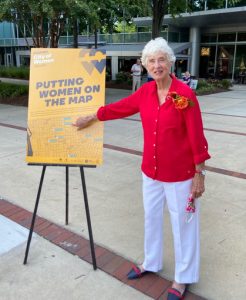 A graduate of Agnes Scott College, majoring in History and Political Science, she arrived in Columbia as the bride of Dr. Sherrod Lewis Bumgardner, and was immediately attracted to the governmental interests of the nonpartisan League and joined in the 50’s. She served as president of the local League from 1963 to 1965 and president of the state League from 1967 to 1971. During this period, she participated in the desegregation of the League and was the first woman recipient of the E. A. McDowell Award for Distinguished Christian Service from the South Carolina Baptist Convention.

“Through the League, I met interesting, involved women. They were not only managing their home responsibilities but also they were accepting responsibility for the way their city was managed, how state government was organized, and happenings on the national level.” Keller Barron, The Columbia Star, November 20, 2012.

In 1972 Barron lead the LWVUS’s national campaign for passage of the Equal Rights Amendment. Locally, she was the Co-Coordinator of the Equal Rights Ratification Coalition of South Carolina with the National Organization of Women (NOW.) The ERA is a decisive issue. It was first introduced to the nation by Alice Paul in 1923 and it still has not been ratified to this day. Barron is quoted as saying, “I want to be in the United States Constitution.”

During this time, when the SC Human Affairs Commission was newly formed and directed by James Clyburn, now Congressman, Governor John West appointed her to the Commission.

In May 1982, Barron was the first recipient of the Modjeska Simpkins Prize awarded by the non-profit, Human Endeavor, to individuals “whose contributions to society excel in the field of social justice, civil rights, and community improvement.” Of Barron’s work, Simkins herself remarked, “in the hot civil rights times, Keller Bumgardner stood with us… and she had a lot more to lose.” At the ceremony the committee also stated that “in times of social conflict, she has made personal commitments and sacrifices to facilitate social understanding,” and her work “called all America to rise to her high standard of justice under the law.”

Barron remains a member of the LWV, where she chairs the VOTE411 initiative in the Columbia metropolitan area and has served in that role since 2017. Barron served as the LWVUS delegate to the 2019 63rd Conference of the UN Commission on the Status of Women in New York City.

An Elder in the Presbyterian Church, U.S.A., she further continues her work of servant leadership.