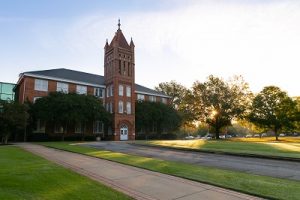 The Lander University Board of Trustees voted Wednesday (Oct. 14) to freeze tuition and general fees for the 2021-22 academic year.

The unanimous vote by the Board of Trustees marks six consecutive years that Lander’s tuition has remained a steady $5,350 per semester ($10,700 annually) for full-time, in-state undergraduate students, after it was reduced and frozen in 2016. General fees, set in 2017 at $500 per semester ($1,000 annually), also will not be increased.

“At a time when students and their families face extraordinary financial and personal challenges because of the COVID-19 pandemic, I am pleased that members of the Lander Board of Trustees remain steadfast in their determination to keep higher education costs affordable for our students, 92 percent of whom are from South Carolina,” he said. “This move helps us ensure that more college students from the Palmetto State will have access to the lifetime rewards of earning a college degree.”

The announcement about the freeze came during a special, called meeting of the Board of Trustees, which usually determines tuition costs later in the academic year.

“The Board of Trustees chose to make an early decision on tuition and general fees so that students and families can begin planning for next year, and our administration is pleased with the direction that they have taken,” Cosentino said.

“Our board members have a consistent record of making affordability a priority when they examine tuition costs, he said. “It is critical during this uncertain time that we hold the line on our tuition and fees, which are among the lowest in South Carolina for a public, four-year institution.”

Dr. Linda Dolny, chair of Lander’s Board of Trustees, credited Dr. Cosentino with the board’s decision.

“Since Dr. Cosentino became Lander University’s president in 2015, he has been determined to hold the cost of higher education steady,” she said. “Because of Dr. Cosentino’s thoughtful leadership and the concern by members of the Board of Trustees for the sacrifices being made by our students, we will continue our tuition freeze another year.”

The move by the Lander board members comes at a time when the University has experienced record enrollment and retention. Total enrollment for the first week of classes was 3,511, an 8.8 percent increase over last year’s enrollment – and the largest enrollment in Lander’s 148-year history. Lander also broke a near 30-year record for retention at 75 percent, topping the previous record of 71 percent set in 1992.

“We believe that the decisions made by Dr. Cosentino and the Board of Trustees have enabled Lander to reach these records, which represent, in part, a measure of the confidence that students and their families have in the quality of education that our University provides,” Dolny said.