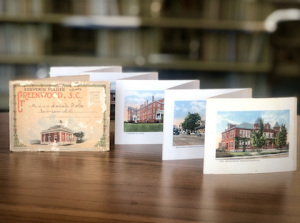 Good things can come in small packages, at least as far as Dr. David Mash is concerned.

Mash, Lander University’s associate director of Library Services, recently received a phone call from Jane McGahee, of Clinton. McGahee told him that she had been going through some things that belonged to her grandmother, Clara Bobo, who attended Lander during the 1930s, and had come across three old Lander College yearbooks.

“She couldn’t bear to throw them away, and she said, ‘would you be interested in these?’ And I said, ‘absolutely, we’d love to have them,’ Mash said.

The yearbooks in the box that Mash received were signed by numerous classmates of Bobo, and one was signed by Dr. John W. Speake, president of Lander from 1932 until 1941. Between two of the yearbooks was something that Mash found even more interesting: a souvenir folder of 17 postcards depicting the old Oregon Hotel, the Southern Passenger Depot, and other Greenwood landmarks of the 1930s. The folder had been mailed to Clara’s older sister Sarah Bobo, of Union, a former Lander student herself.

“We’re just so excited that this little piece came,” Mash said, calling the folder “unique to anything we have.”

While the outside of the folder shows signs of wear, he said, “the interior of it is in perfect condition.”

Mash is in the process of digitizing the photos and researching the places shown in them, so that he can annotate each image with historic information and context. The photos will be stored in acid-free envelopes and indexed, “so that if somebody walks into this library 50 years from now, they’ll have the indexing, and they’ll be able to go right to them.”

To view the postcards now, go to http://www.lander.edu/archives/postcardexhibit.

Mash encouraged friends of the university to donate old postcards or other items of historical importance to Lander’s archives collection. Even something small, he said, can be “of large consequence.”