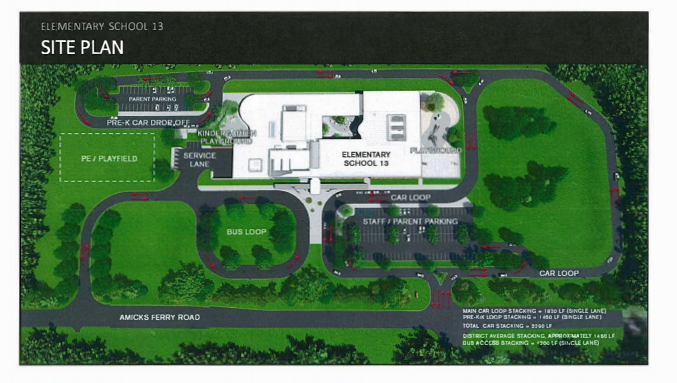 Lexington-Richland School District Five is a step closer to construction of its new elementary school in Chapin. The Board of Trustees voted 6-1 on Sept. 9 on a measure which allows construction to commence on the elementary school on Amicks Ferry Road. The approval of the amendment to the Construction Management (CM) at Risk contract, to include an Early Site Package, came after an update by architects and designers detailing new landscaping required by a county ordinance and other minor design changes. The district’s thirteenth elementary school is slated to open August 2021.

The vote “authorized the administration to enter into contracts with the district’s CM at Risk contract for a Guaranteed Maximum Price (GMP) addendum 1 the (Early Site Package) including the kindergarten Pre-K loop for the sum of $3,656,858,” according to a motion made by Board trustee Ed White and seconded by Board trustee Nikki Gardner.

In voting against the amendment, Board trustee Ken Loveless questioned the Early Site Package, expressing concern over roadwork and “much of the site work …to be done on the back end of the project.”

Contractors addressed the concerns, saying the Early Site Package would “lock in” subcontractors to prices for concrete and other materials with volatile pricing. Roadwork, sewer and water would be done at the start of construction while ensuring builders are being “good neighbors” during construction, said Contract Construction President Greg Hughes.

Several Board members pointed out the record of Contract Construction, which has done work in the district since the early 1990s including construction of Ballentine Elementary School and work to parts of Chapin Middle School and Dutch Fork High School.

On July 17, 2017, the School District Five Board of Trustees approved the purchase of land on Amicks Ferry Road in Chapin. With the approval of the Early Site Package on Sept. 9, 2019, contractors and designers expect work to begin on the site in the next few weeks.

For more information on CM at Risk, the project schedule and design and the presentation from the Sept. 9 School Board meeting, visit www.lexrich5.org/elementaryschool13.