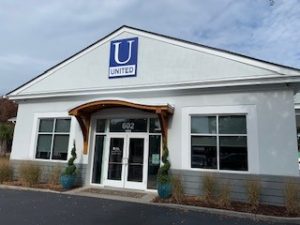 United Community Bank has opened a new office location at 602 Coleman Boulevard in Mt. Pleasant. This brand-new facility offers an ATM, a convenient drive-thru, and access to mortgage and commercial lenders. This is United’s 4th location in the Charleston metro area.

“We are thrilled to expand our ability to serve customers in this growing Mt. Pleasant community. We appreciate the opportunity to serve our customers in whatever way is most convenient for them, and in-person support remains an invaluable piece of that service,” said Dixon Woodward, South Carolina State President for United Community Bank. “We look forward to continuing to grow our presence throughout the Lowcountry.”

The team at the Coleman Boulevard branch includes Nancy Aurora, La’Gea Johnson, and Tyler Bowers. Aurora is a new resident of the Lowcountry after several visits from her native New York. She has held several leadership roles in an accomplished career in the financial services industry. Johnson joins the team from United’s other location in Mt. Pleasant and will be a familiar face for current customers. Bowers will also join the team after relocating to the area earlier this year.