Then I think of Chuck Leavell, once with the Allman Brothers Band and now with the Rolling Stones, who once worked at Muscle Shoals as a studio musician. At the tender age of fifteen, he struck out for Muscle Shoals where he began his ascent. His path and mine crossed and so when I hear those two words, “wild horses,” I think of Chuck. 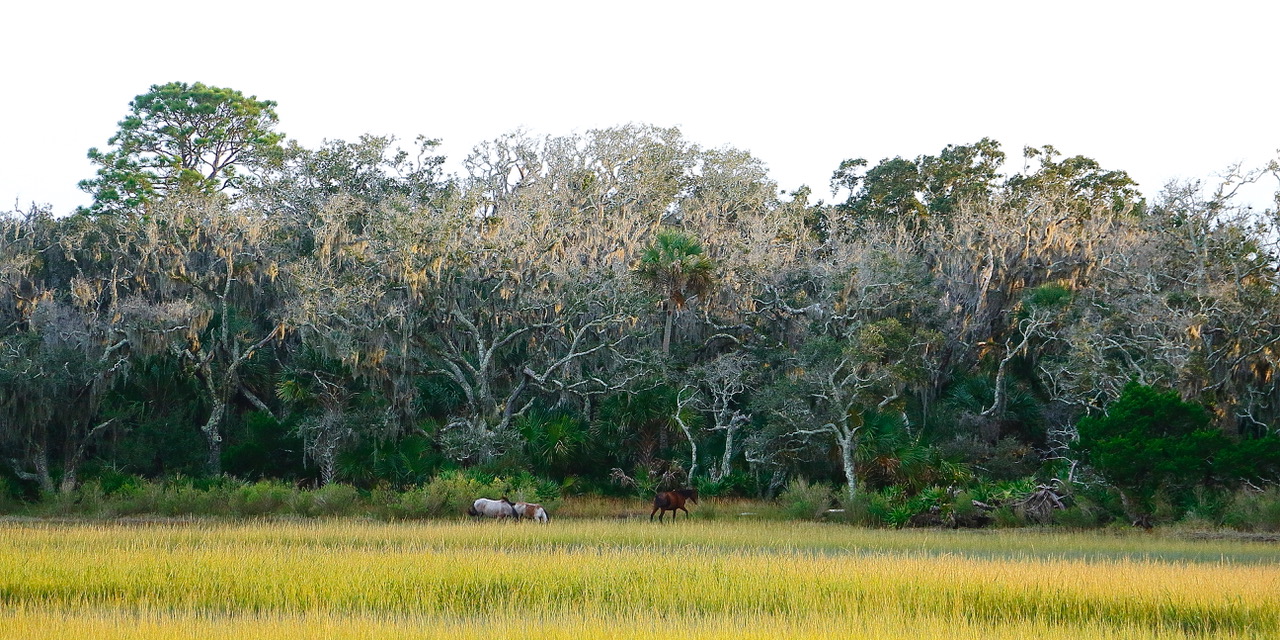 The wild horses of Cumberland Island.

Another thought sends me back to 2010 and a hot August day when I followed men on marsh tackies. They were hunting wild hogs on stalwart horses the Spanish stranded on our Atlantic shore in the 1600s. That was when stunned English explorers, mouths agape, beheld Cherokee and Chickasaw Indians riding small, rugged horses. Abandoned by the Spaniards, feral marsh tackies sought refuge in Lowcountry marshes, where they were captured and domesticated, first by native people, then by European settlers and African slaves. Conquistadors, thank you for gifting us wild horses. Whether left behind by design or here because shipwreck sent them swimming ashore, we’re glad to have them.

Yet another notion pops into my mind, Cumberland Island. Yes, Cumberland Island where another ill-fated Kennedy, John Junior, married. This national seashore is home to wild horses and the majestic ruins of a majestic place with a majestic name, Dungeness. The list of those who built and lived on Cumberland reads like a who’s who of the famous and extraordinary. Among the names are James Oglethorpe, Nathaniel Greene, Henry “Light-Horse Harry” Lee, father of Robert E. Lee, and Thomas M. Carnegie, brother of Andrew Carnegie. It was the Carnegies who built Dungeness. Fire, possibly arson, destroyed the mansion in 1959 and today its ruins send a clear and utterly undeniable message—nothing lasts forever.

When I hear the Stones song or when someone says, “You know up on North Carolina’s Outer Banks wild horses run free,” I get another thought. I think of an October day when the sun rained down gold as I rode a tour boat near Fernandina Beach, Florida. We cruised along green marshes and sandy shores of aforementioned Cumberland Island. Sure enough, wild horses grazed along the edge of the maritime forest.

The next day Georgia played Florida. Just before the half in an electric three minutes and change, the Dawgs put away the Gators with a three-touchdown flurry. When the game ended, wild horses couldn’t have dragged the red-and-black throng into the streets, much less the St. Johns River, that lazy river that flows north towards Georgia.

It’s funny how the mind works. Just two words, “wild horses,” take me in several directions. Rock and roll and recording studios, an assignment to cover men hunting wild hogs, ruins and the famous, and a golden Saturday when the football gods smiled on the Dawg Nation. All of it swirls together in the colorful alchemy of the mind and its wondrous capabilities. Pray tell what do “wild horses” drag into your mind?