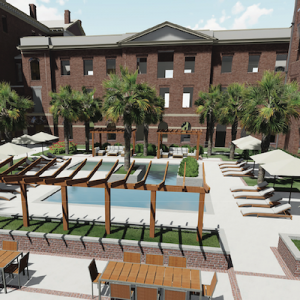 The BullStreet District’s storied Babcock Building, one of downtown Columbia, South Carolina’s most iconic buildings, has a new owner for the first time in its history.

Title of the building was given to Clachan Properties, the Richmond, Virginia-based historic renovation specialist, by Hughes Development Corporation, master developer of the 181-acre BullStreet District project.

Under a 2010 development agreement with the South Carolina Department of Mental Health, Hughes Development Corporation obtained the rights to own and renovate the historic landmark as part of a 20-year buildout plan for the entire property, known as the largest urban redevelopment project on the East Coast. The BullStreet District just entered its sixth year of construction after breaking ground in 2015.

“The difficulty of renovating the Babcock Building cannot be overstated because of its cost, size, historic legacy and extremely poor condition,” said Robert Hughes, president of Hughes Development Corporation. “Clachan is one of the few companies in the United States that has the craftsmanship, experience and historic sensitivity to breathe new life into it. We gave Clachan the building with full confidence that they will honor its history and give it a bright future.”

While local, state and National Park Service approvals have been granted, the last significant step before renovation can begin is approval of a loan from the U. S. Department of Housing and Urban Development.

Clachan plans to turn the rambling 254,022 sq. ft. structure into 208 one, two- and three-bedroom apartments, with a pool, dog park, grilling garden, lounging and exercise facilities. The building has 1,100 windows and 20-inch thick masonry walls.

Renovation is projected to be completed by late 2022.

The Babcock Building, designed in 1858 and completed in 1885 as the South Carolina Lunatic Asylum, is listed on the National Register of Historic Places. Its last patients left around 1991. The building saw minor repairs and a repainting of the cupola in 1994, but Babcock was abandoned for good in 1996. Since then, it has suffered the ravages of weather and time.

“This is one of the most significant — and most difficult — historic restoration projects in South Carolina history,” said Columbia Mayor Steve Benjamin. “A long term, low interest HUD loan is essential for undertaking a project of this magnitude because of the complexities involved in renovating a massive, deteriorating building to historical standards, and Clachan is working on obtaining this loan. The City of Columbia considers this a high priority and supports all of Clachan’s efforts.”

To learn more about historic preservation in the BullStreet District, visit https://bullstreetsc.com/about/preservation/.

Known as the largest urban redevelopment project on the East Coast, the BullStreet District is an active transformation of the historic, 181-acre South Carolina State Hospital campus into a vibrant, mixed-use lifestyle district that reflects the authenticity of downtown Columbia, S.C. The state’s first urban gigabit community, BullStreet is a city-within-a-city, located one mile from the S.C. State House and anchored by the award-winning stadium, Segra Park (f.k.a. Spirit Communications Park), home of the Columbia Fireflies Minor League Baseball team. Well into a 20-year buildout that started in January 2015, the district already is home to an array of local and national businesses, including outdoor retailer REI Co-op, global tech giant Capgemini, Central Carolina Community Foundation, Founders Federal Credit Union and Ogletree Deakins law firm in the First Base Building; SOCO, COLAToday and tech/creative startups in the historic Bakery; Bone-In Barbeque restaurant and tech firm truematter in the historic Ensor Building; the S.C. Department of Natural Resources’ Parker Annex Archaeology Center; the sleek, modern Central Energy event venue; the new TownPark at BullStreet townhomes, and the upcoming Starbucks retail store and drive-through. Soon, the Merrill Gardens active senior community will open across the street from a new 20-acre public park, with a 2-acre pond, trails, dog park, restored creek and more. BullStreet contains 125,000+ square feet of commercial/office and retail space and is zoned for up to 3.3 million square feet of commercial use and 3,558 residential units. Follow @BullStreetSC and #BullStreetSC on Twitter, Instagram and Facebook, and learn more at http://www.bullstreetsc.com.