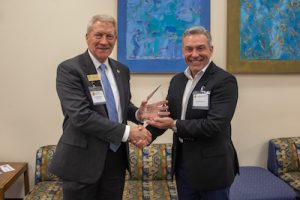 The strategic operating principle of Lander University’s College of Business is “Educating through Impact.” This principle was in full display on Thursday, Oct. 13, as the college hosted its second Lander Business Leadership Symposium (LBLS) for students and working professionals in the Greenwood community.

Falling during the University’s Homecoming festivities, this year’s LBLS focused on showcasing the positive societal impact of the college’s alumni, and featured lectures and breakout sessions led by alumni and Lander’s business faculty. The event also served as an outlet for students and alumni to make connections, and for students to receive career advice from professionals working in a wide range of career fields.

One such breakout session featured alumni who have also worked at Lander: Jessica Puckett ’10 and Kurstin LaCoste ’14, both of the Office of Human Resources; MaryKate Leggieri ’15, of the College of Business; and Erin Nodine ’14, formerly of Lander Athletics and currently of the Upper Savannah Council of Governments. The four joined Steve Moss ’86, of TD Synnex, to share their experiences navigating the job search, negotiating salaries and pursuing new career opportunities. And as Lander alumni, they spoke of ways that Lander prepared them for their careers.

For Nodine, the campus jobs and internships at Lander were the most impactful, along with the relationships she formed with professors, alumni and her supervisors. After completing an internship at Self Regional Healthcare, she approached her internship supervisor to ask if she would serve as a professional reference for jobs in the future. “That supervisor there was the best reference I’ve ever had for any job,” Nodine said, emphasizing the importance of relationship building.

Some students expressed concern with not having the right amount of experience that an employer is looking for immediately after graduation. But Puckett, who serves as Lander’s employment manager, suggested students focus on other projects and initiatives that can demonstrate an applicant’s skill set and experience. “There’s something you’ve done that attracted you to this job posting,” she said. “Something that lets you know that you’re capable of doing this job.”

Serving as the keynote speaker for the symposium was Joseph Bowers, of the Class of 1987. Bowers is the co-founder and CEO of The CREATiON Companies, a world-class retreat and executive learning destination. He previously served as the president and chief operating officer of Geniecast, a real-time learning delivery platform he also co-founded.

Additionally, Bowers has served as the Chief Networking Officer for the Young Presidents Organization (YPO) and provided oversight for the organization’s International Mentoring Program, as well as the Member Networks platform. His experience in networking and professional development made him the perfect choice to keynote the symposium. As part of the event’s proceedings, Bowers was awarded the Distinguished Business Leadership Award in recognition of his exemplary commitment to business leadership. Bowers is only the second person to receive this award. The first was George R. Starnes, of the Class of 1981 and former chair of Lander University’s Board of Trustees.