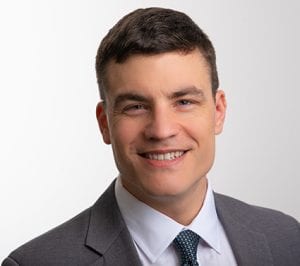 Buxton & Collie, LLC, announced the promotion of Nathan D. Johnson, the latest partner of the law firm. Johnson focuses on business law and plays an active role in both the legal and local non-profit communities.

A Vermont native, Johnson came to South Carolina to study at Clemson University, earning his degree in Political Science. Later, Johnson’s studies brought him to Charleston to pursue both his J.D. and MBA at the Charleston  School of Law and College of Charleston, respectively. While in law school, he took a particular interest in the legal issues surrounding telemedicine and now regularly represents medical professionals in practice transitions, including physicians, dentists and veterinarians.

Outside of work, Johnson is an active community member. He volunteers at events like Light the Night for the Leukemia and Lymphoma Society and Shuck Cancer for the American Cancer Society. He has served since 2016 on the board of the Charitable Society of Charleston, an organization dedicated to serving local non-profits such as Windwood Farm Home for Children and One80 Place. Also, Johnson organizes the annual Reindeer Run in collaboration with MUSC.  In 2019, Johnson was named to the Charleston Regional Business Journal’s Forty Under 40 and was selected for the Charleston Metro Chamber of Commerce Leadership Charleston program.