2019 American Idol Finalist Caleb Lee Hutchinson was playing at the Tin Roof in Columbia, and my brand-new press pass was burning a hole in my pocket. Caleb Lee did not make my first celebrity interview easy, but he surely was cute about it.

I had witnessed his range each week on Idol but was still surprised by his playlist – Hank Williams, Jr., Chris Stapleton, Willie Nelson, and Post Malone. In the words of the famous Sesame Street song, “One of these things is not like the other. One of these things just doesn’t belong.” Except, Caleb Lee makes it work. His arrangement of Malone’s Better Now is outstanding. My first clue to Hutchinson’s devilish nature came when I told him I really liked his version of Malone’s song. He perked up and said, “You know he’s here” and nodded towards the back room. I fell for it, and Hutchinson knew he had an easy mark. Yes, that’s when it all began – the night that Caleb Lee Hutchinson had fun with Tammy Davis. With someone as cute and talented as Hutchinson, I didn’t even mind.

Hutchinson has more than 300,000 followers on Instagram. I bet most of them are female. At 6’3”, he’s taller than I expected. In boots, he towered over everyone in the place. His baby face makes him look younger than his 20 years. He may look like a child, but he has the voice of an old man. A blonde-haired, blue-eyed baritone who sounds like a cross between Johnny Cash and Elvis – that’s Caleb Lee. 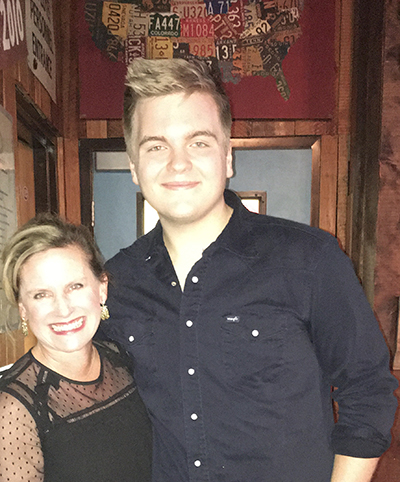 I asked about his girlfriend Maddie Poppe. Caleb and Maddie met on the show. Maddie Poppe won the title, but Caleb got the girl. They’ve been together for more than a year now, and Poppe is reported as saying she would marry him in a minute. I understand completely. I really wanted a good romance story, but instead I got a diversion.  He said “his husband” preferred to keep their relationship private. At that point I played the I’m-old-enough-to-be-your-mother-and-I’m-a-school-teacher card and called him out. I knew he was as straight as any straight man I’d ever met, and I knew he was still with Poppe because I had done a little bit of research.

“Caleb, you are a good southern boy from Georgia. Why are you making this so hard on me?” He leaned in and put his hand on my shoulder to steady himself. He wasn’t being fresh. He was just a big, tall man messing with a short, little woman. He looked me right in the eyes, and with that slow, deep, southern drawl said, “Georgia? No ma’am. I’m not from Georgia. I’m from Wisconsin.” At that point, I admitted defeat, but did appreciate the fact that he called me “ma’am.”

I had learned all I needed to know about Mr. Hutchinson.  Talented?  Without question.  Charming?  Too much for his own good, perhaps. His flirtatious manner is as smooth as his voice.

Caleb Hutchinson is a star in the making, and I can’t wait to watch his rise to fame.

Tammy Davis is a local writer who can’t wait for the next season of American Idol. Visit her website at www.tammydavisstories.com.