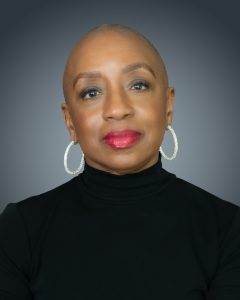 The Detroit native joined the SCAC as artist development director in 2019. Scott-Fitts was previously creative director and on the founding staff of the McColl Center for Art + Innovation in Charlotte, North Carolina, where she curated exhibitions, developed an artist-in-residence program, and established an international residency program for North Carolina artists in South Africa and Ireland.

She has served on numerous grant panels nationwide and taught in higher education. She is currently co-chair of the individual artist support committee for Grantmakers in the Arts and is the founder of South Carolina Artists in Action, which seeks to serve the unique needs of Black South Carolina artists. While adept at serving others, Scott-Fitts is also a practicing artist and has exhibited at museums, public spaces, and galleries throughout the Southeast with works in public and private collections in the U.S., Japan, and the United Kingdom. She holds a Master of Fine Arts in painting from Maryland Institute College of Art in Baltimore.

Scott-Fitts will step into the role officially on July 1, joining another deputy director and a senior deputy director on agency executive leadership along with Executive Director David Platts. She will continue to manage day-to-day artist development initiatives as she has been while adding oversight of select programs of the SCAC.

“I am thrilled to be a deputy director. I look forward to working with the programs teams as they create more opportunities for and support the state’s artists and arts organizations,” Scott-Fitts said.

“Ce has been a valuable member of the Arts Commission team since her first day here. She has put tremendous effort into developing meaningful relationships with South Carolina artists to connect them with agency resources. Among those are the fellowships program she modernized and rejuvenated and our emerging artists program, which offers not just a grant but valuable mentorship. We are excited that the additional agency programs and constituents will now benefit from her expertise,” Platts said.