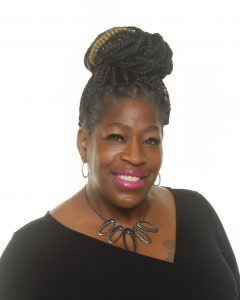 Charleston County School District (CCSD) is proud to announce Carolyn Anderson as principal at Septima P. Clark Academy. Anderson has served as the school’s interim principal since the beginning of the 2021-2022 school year.

Anderson began her career in CCSD in 1989 at Burke High School as a teacher assistant. She later served as a Career and Technical Education (CTE) teacher for several years before joining the staff at Brentwood Middle School in North Charleston as an Advancement Via Individual Determination (AVID) teacher.

During her time at Brentwood, Anderson not only implemented the AVID program to increase student’s choice of postsecondary education, but also taught keyboarding and computer literacy to grades six through eight. She served as chairperson of the leadership team for Parent and Community Involvement and as the Parent Coordinator, as well as incorporated student activities with the North Charleston Recreation Department.

In 2009, Anderson joined Morningside Middle as a leadership teacher where she designed a curriculum around character, leadership skills, and the study of “Seven Habits of Highly Effective Teens” by Sean Covey. She also created activities that catered to single-gender studies, planned various field trips to encourage higher education, and organized leadership retreats for students.

Two years later, Anderson became an assistant administrator at CCSD’s Sixth Grade Academy at the Ron McNair campus before taking a position at Jerry Zucker Middle School as a career and technology teacher. In 2017, Anderson became an assistant principal at North Charleston High School where she oversaw nearly 200 students in the school’s Ninth Grade Academy Anderson for four years.

Anderson holds a Bachelor of Science in Marketing from South Carolina State University, a Master of Business Administration from Webster University, and a Master of Education in Secondary Administration and Supervision from Charleston Southern University. In addition to her roles in the classroom, Anderson served as a South Carolina Teacher Mentor from 2008 to 2017 where she offered support to induction teachers in the district through mentorship in the development of teaching skills, classroom management, and effective communication with students and parents. Anderson also is the founder and director of Anderson Alpha Angels, LLC (AAA), an all girls’ elementary, middle, and high school team program designed to cultivate the personal strengths of young women through stepping.

For more information, contact the Division of Strategy and Communications at (843) 937-6303.