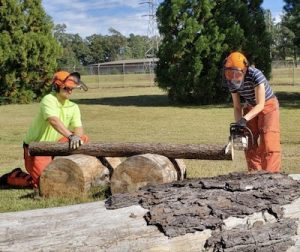 Sandy Kumm, of Tamassee, South Carolina, got involved with Women Owning Woodlands for the specific reasons indicated within the organization’s name: she’s a woman who owns woodlands — in this case, specifically intended for wildlife habitation.

During a recent WOW event in Clemson involving a workshop on chainsaw use, Kumm said she found the instruction ideally suited for her purposes.

“The workshop provided me the opportunity to learn chainsaw safety, operation and maintenance, as well as what type of saw was best suited for my needs,” Kumm said. “Together with the lecture, practical training and an invaluable manual, I left the class with the knowledge and confidence in selecting a saw for my purposes; how to operate and maintain the saw; and can now accomplish small jobs safely by myself.”

And such training is exactly the kind of foundational learning WOW hopes to provide.

More than 11 million owners make decisions about private forested land in the United States that will have an impact on more than 420 million acres, 58 percent of the nation’s total forestland.

In the United States, 58 percent of the nation’s family forest ownerships with at least 10 acres of forestland also have at least one female owner. Within the single-owner population of landowners, women are the sole owners of and primary decisionmakers for 31 perceent of ownerships.

“This is certainly the case with the folks that we work with in South Carolina, and I believe on a national scale too — what ends up happening a lot is that, historically or traditionally, the women in these families will be kind of left out of the conversation of land management,” Darr said. “It will usually be the husbands and the sons who take care of that, and a lot of times what will happen — or what we’ve found in South Carolina especially — is that the husband will die and his wife will be left with the land, and she won’t have any idea what to do with it or how to get the best value out of it.”

And data from the 2013 iteration of the U.S. Forest Service’s National Woodland Owner Survey supported those statistically significant differences between male and female landowners: female owners are more likely to have inherited land, particularly from a spouse, whereas male respondents were more likely to manage for wildlife, have a commercial timber harvest and have undertaken management activities in the past five years.

Thus, while there are considerable similarities between the attitudes and behaviors of female and male owners, the differences are important in understanding constraints and barriers and must be considered in the design of forestry programs and outreach.

Darr said she has also spoken with women whose fathers own the property and they are next in the line of succession, seeking to feel a sense of ownership with the forestland that will one day be their own.

Hiesl said the primary idea behind this particular workshop was to provide women with the skills needed to clean up storm wood if a tree falls and blocks access to their farm or property.

“If you look into the literature, it clearly shows that we have a shift in forest ownership happening from traditionally male to more and more women, whether they buy their own land or inherit forest land,” he said. “So, we wanted to get ahead of the curve and start training this new, emerging group of forest owners.”

The workshop was designed to educate either first-time users of chainsaws or those with very little experience and included education on both chainsaw safety and maintenance.

“What we teach is at a very basic level, and rightly our focus is on personal protective equipment, safely handling chainsaws to avoid hurting themselves and making sure they know all the safety features on the saw, the safety clothing they can wear and how to safely handle and then safely cut trees or logs into smaller sections so that they can move them away,” Hiesl said. “So, it’s on a very basic level, but also a very efficient level to show them certain cuts to really make their lives easier to safely handle the saws and reduce the strain on their body.”

The first three WOW chainsaw workshops being offered in the state were funded with a grant from the South Carolina Sustainable Forestry Initiative (SFI) Implementation Committee. The grant funds were awarded in June 2021 and allowed for the purchase of a variety of chainsaws and safety gear for the workshops.

According to the latest data from the US Forest Service National Woodland Owner Survey, there are an estimated 4 million family forest ownerships (with 10+ acres) across the U.S. Approximately 20 percent of these ownerships have a woman as the primary owner.

Darr said this makes the presence of WOW even more valuable in support of this emerging and growing group of forestland owners.

“It can be kind of intimidating if you go to a male-dominated space,” Darr said. “It’s not a negative thing, but it can be kind of hard if you’re the only woman in the room to speak up and say, ‘What do you mean by cruising timber?’ So, this creates a more comfortable environment for these women. They can come and show up and talk to other women who have been through it. We really try to teach them the very basics through all the programming that we do.”