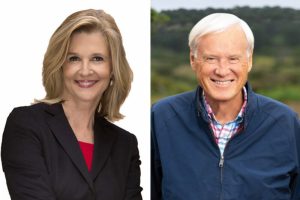 In today’s world where the loudest voices often drown out differing points of view and make productive debate difficult, civil discourse has become an oxymoron.

The hard truth is that without a more civil society, freedom becomes more fragile. We’ve already witnessed how divisive rhetoric can lead to disorder with the attack on the U.S. Capitol on Jan. 6, 2021. But how do we rein in partisanship so that constructive debate can return to the public square?

To try to answer this question, the College of Charleston has created the new College of Charleston Speaker Series on Public Discourse and Civility, hosted by Pulitzer Prize-winning Washington Post journalist Kathleen Parker, aiming to highlight the value of civility when sharing opposing ideas.

The inaugural event, which is free and open to the public, will feature longtime political commentator Chris Matthews, former host of MSNBC’s Hardball, at 6 p.m. on Nov. 11, 2022, in Alumni Memorial Hall. In addition to her hosting duties, Parker will serve as the series’ executive director. She also has a one-year appointment at the College as a distinguished professor of industry practice.

“I am excited that we are working with Kathleen Parker on this important speaker series,” says College of Charleston President Andrew Hsu. “Not only is Kathleen an award-winning journalist and writer, she is a thought leader in the arena of public discourse. She understands the importance in our democracy for having platforms for thoughtful, civil debate and dialogue on difficult topics.”

Parker, who spoke during commencement exercises at the College in 2020 and whose youngest son, John Cleveland, graduated from CofC in 2007, hopes the series will highlight how we can have civil conversations and bridge political divides.

“I’m very excited to work with the College on this important initiative and am equally grateful for President Hsu’s vision,” says Parker. “He understands the critical need to mend our nation’s divisions and seek higher ground by elevating the way we talk to one another.”