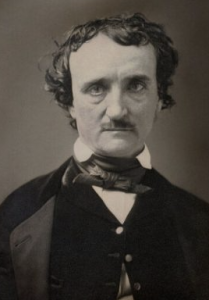 Peeples is one of the nation’s leading scholars on Poe and has written two books on the author. In 2009, the bicentennial of Poe’s birth, he was awarded a Fulbright Specialist grant in recognition of his work regarding Edgar Allan Poe, allowing him to give a series of lectures and workshops in Moscow. Peeples has also given keynote lectures and invited talks at conferences at the Edgar Allan Poe Society of Baltimore; the University of Castilla La Mancha, Spain; Boston College; the University of Virginia; and at a number of other colleges, universities, and public libraries.

“It’s hard to think of an American author who has had more influence on world literature than Poe,” says Peeples. “Though he’s best known for his gothic tales and a few poems, he was an incredibly versatile writer, publishing detective fiction and science fiction before those genres were really established, plus satires, literary hoaxes, journalism, an adventure novel, and some of the most important literary criticism and theory of his time.”

Poe spent some time in the Charleston area – specifically at Fort Moultrie on Sullivan’s Island where he was stationed with his Army regiment in 1827 and 1828.

“One of the things I emphasize when I teach Poe was that he made his living writing for and editing periodicals, what he called the ‘magazine prison-house.’ He excelled in short forms at a time when the number of magazines in American was increasing exponentially, so I talk with students about how Poe’s career and the forms he wrote in were shaped by the publishing world of the 1830s and 40s. A lot of people think Poe wrote psychological horror because he was depraved or psychotic himself; he wasn’t completely stable, but mostly he just knew what he was good at writing and knew what people liked to read.”

As Poe’s birthday approaches, his enduring popularity in American culture only continues to grow. Netflix recently released The Pale Blue Eye (the title comes from Poe’s short story The Tell-Tale Heart). The historical thriller, based on a 2006 novel by Louis Bayard, is set at West Point, where Poe was a cadet before he was court-martialed in 1831. In this fictionalized film, Poe is enlisted by a detective (played by Christian Bale) to help solve a series of grisly murders.