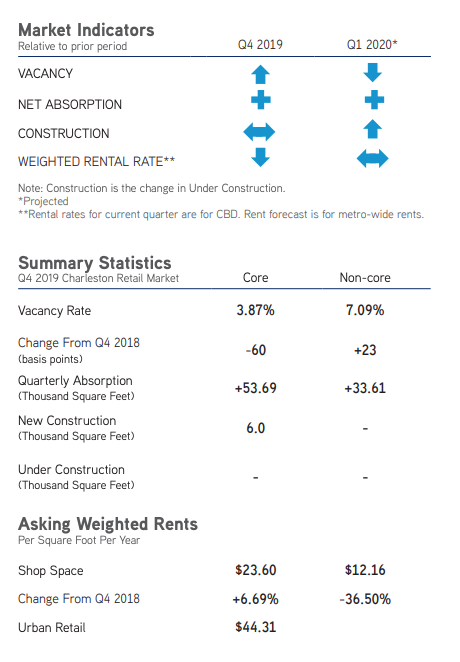 Over the past 12 months, the Charleston retail market absorbed 207,646 square feet; non-core shop space absorbed 154,151 square feet, and core shop space absorbed 53,495 square feet. West Ashley’s annual absorption was 198,962 square feet- the most within Charleston market last year. There were 211,102 square feet of new retail shops added to the Charleston market in 2019, many of which were shop spaces under 10,000 square feet within the West Ashley submarket. The overall market vacancy rate dropped from 5.54% during the fourth quarter of last year to 5.42% during the fourth quarter of 2019. The overall average triple net weighted retail rental rates dropped to $14.28 per square foot overall; core retail space rental rates rose to $23.60 per square foot due to new construction deliveries.

The quarterly vacancy rate increased from 5.03% during the third quarter of 2019 to 5.42% this quarter due to anchor vacancies occurring in North Charleston. The overall core vacancy rate dropped from 4.36% last quarter to 3.87% during the fourth quarter of 2019; however, non-core vacancy rates increased. Overall, the West Ashley submarket absorbed 129,016 square feet at year end, West Ashley Shopping Center absorbed 51,744 square feet of the non-core absorption in a new Harris Teeter and the Food Lion Center at 65 Sycamore Avenue absorbed 32,000 square feet. Meanwhile, most of the West Ashley core absorption occurred within Ashley Landing. One 6,000-square-foot shop completed at The Shoppes at Centre Pointe in the North Charleston submarket and there are currently 167,562 square feet of shopping center space proposed to be built throughout the Charleston market. The overall average rental rate for the remaining shop space availabilities ranged from $7.60 per square foot in the Berkeley submarket to $30.00 per square foot in the Peninsula submarket.

Charleston prides itself on historic charm and a neighborhood atmosphere. Retailers who adapt these preferences to their shops have a better success rate. In addition, finding the appropriate submarket in which to locate is the key to gaining customers and ensuring ongoing business. As retailers shuffle through the Charleston market seeking their specific niche in 2020, the retail tapestry will knit itself into a predictable pattern. For instance, suburban submarkets will see brick-and-mortar, omni-channel chain retailers, while the Peninsula tends to attract locally-owned restaurants and mixed-use retailers. Northern King Street allows trendy bars and craft breweries to thrive due to the presence of millennials and young professionals. Within Charleston urban retail, several shop spaces located within opportunity zones are in various stages of redevelopment. The Charleston market will find more pop-up shops throughout the market because it is a popular way for retailers to assess their success rate at several locations before making a long-term commitment.

Non-core vacancy rates have fluctuated over the past year and are expected to continue to do so as tenants shuffle around the market finding a good fit; however, core retail vacancy rates have consistently tightened and new construction will be necessary to meet ongoing consumer demand. There are currently several projects proposed to begin construction throughout the Charleston submarkets and, when those come to fruition, the rental rate average will trend upward.