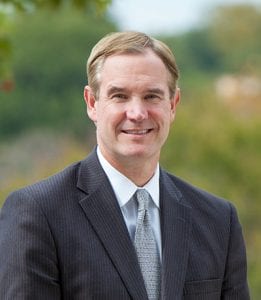 As president and COO, Blair will continue to lead the bank’s lines of business, as well as technology and operations. His expanded responsibilities include HR, credit administration, and all other customer-facing support functions.

“Since joining Synovus three years ago, Kevin has led some of our most impactful initiatives, including the successful completion of a significant merger and the restructuring of our go-to-market delivery model,” said Stelling. “He has also been influential in recruiting top talent to drive revenue, encourage innovation, and position our company for long-term success.”

Blair joined Synovus as CFO in August 2016 after more than 20 years in the commercial banking industry. He earned a bachelor’s degree in Management and Economics from James Madison University and an MBA from George Washington University. Blair is current chair of the United Way of the Chattahoochee Valley fundraising campaign and is on the Board of the Georgia Research Alliance.

In addition to Blair’s appointment, the company also announced the promotion of three top senior and executive leaders:

Deputy General Counsel Mary Maurice Young has been named corporate secretary. As corporate secretary, Young will lead the company’s corporate governance practices, including managing all board matters, ensuring board members are fully equipped and informed to fulfill their fiduciary duties to shareholders, and serving as a key resource to the board and senior management.

Chief Compliance Officer Gloria Banks has been named executive vice president and chief ethics officer. In her expanded role, Banks is responsible for developing compliance and ethics strategy, and directing and monitoring the company’s overall compliance and ethics programs. She is also responsible for ensuring the bank’s activities comply with all consumer regulatory standards. Banks will serve on the company’s executive management team.

Synovus Financial Corp. is a financial services company based in Columbus, Georgia, with approximately $48 billion in assets. Synovus provides commercial and retail banking, investment, and mortgage services through 298 branches in Georgia, Alabama, South Carolina, Florida, and Tennessee. Synovus Bank, a wholly owned subsidiary of Synovus, has been recognized as one of the country’s “Most Reputable Banks” by American Banker and the Reputation Institute. Synovus is on the web at synovus.com.