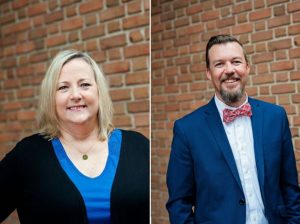 Countybank is pleased to announce that Pam Taylor has been elected as a Banking Officer and Patrick Craven promoted to an Assistant Vice President by the Countybank Board of Directors.

Taylor joined Countybank in 2012 as a Commercial Administrator. She provides a wealth of knowledge and has committed to giving excellent service to both internal and external clients. Taylor has extensive commercial banking experience and has worked in the banking industry for more than 37 years. Prior to joining Countybank, she served worked in commercial lending, customer service, and operations.

“Pam has been an important part of Greenwood’s commercial lending team during her 8 years with Countybank,” said David Tompkins, Senior Vice President, Greenwood Market Executive. “Her skills and support were integral in Countybank’s recent success helping local businesses get funding as part of the Paycheck Protection Program.”

Craven joined Countybank as a part-time teller in 2000. His strong work ethic, desire to learn, and ability to lead have enabled him to advance in his career. Earlier this year he was promoted from Financial Center Team Leader to Financial Center Manager for Countybank’s Reynolds financial center in Greenwood. Craven has played a critical role in managing a robust portfolio of deposits and retail loans during his 20 year tenure with Countybank. He holds an associate degree in business from Piedmont Technical College, completed Leadership Greenwood in 2017, and will graduate from South Carolina Bankers School in 2021.

“Patrick serves in a leadership role at our Reynolds financial center and has played an important part in Countybank’s growth in Greenwood,” said Amy Whitney, Vice President, Retail Banking Sales Manager. “He also embodies our mission in his commitment to serving our customers.”