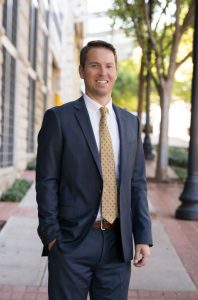 “Wells has been an asset to Countybank’s commercial lending team in Greenwood,” said Andy Westbrook, Executive Vice President, Commercial Banking Manager. “We look forward to having him join our talented team of professional lenders in Greenville.

Dunlap joined Countybank in 2013 as a Commercial Credit Analyst and then CRA Officer for Countybank. In 2019 he transitioned to the role of Commercial Relationship Manager in Greenwood and later that year was promoted to Vice President. “During his time in Greenwood, Wells has focused on developing new business relationships and has been an integral part of our commercial banking team,” said David Tompkins, Senior Vice President, Greenwood Market Executive of Countybank.

“Wells has and continues to serve as a great resource for our business clients in the Greenwood community,” said Ken Harper, Executive Vice President and Chief Operating Officer at Countybank. “We are pleased to be able to welcome him into the growing Greenville market where he will continue to strengthen our business ties across the Upstate.”