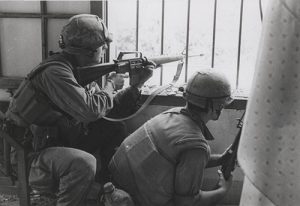 At the start of the fateful year of 1968, then-Capt. Myron Harrington, USMC, was a supply officer in Da Nang, far from the sharp end of the Vietnam War. In February, he was leading a company through the most intense combat of the Tet Offensive.

He would receive the Navy Cross for his actions on Feb. 23 at the head of Company D, First Battalion, Fifth Marines, First Marine Division. But he doesn’t want to talk about that. He prefers to talk about the extraordinary job his Marines did as they played a critical role in taking back the heavily fortified Citadel of Hue, Vietnam’s historic royal capital.

That’s the story Col. Harrington will tell at noon on Friday, May 27, at the South Carolina Confederate Relic Room and Military Museum in Columbia. The program is open to the public with free admission.

Col. Harrington will begin with an overview of the Tet Offensive – the stunning countrywide attacks that failed to achieve North Vietnam’s stated objectives, but which was successful in shaking American confidence back home in the war effort.

At Hue, he will explain, there were really three battles. The Army had the job of fighting outside the city, to the west, to keep enemy reinforcements from reaching the city. Initially, the Marines were assigned to clear the enemy from the old French colonial south side of the city. South Vietnamese troops were to take the Citadel, the historic Imperial City that contained treasures of incalculable cultural importance to their country.

But the Citadel was held too strongly by the enemy, and the Marines were called in to help.

The battle was claustrophobic – extremely intense fighting against a numerous enemy crammed into a tight space. Harrington’s company found itself constantly attacking fortified positions that were mutually supported by other reinforced position.

“It was a challenging environment,” he says with great understatement.

“It was imperative that we had to take the high ground,” he remembers. But that was easier said than done. His battalion had already tried twice when Company D made its attempt.

The citation for his Navy Cross says that “Continuously moving from one position to another, he pinpointed enemy emplacements and skillfully directed the fire of his men. After silencing four hostile positions, he requested supporting arms fire and skillfully adjusted 60-mm. mortar fire to within twenty-five meters of the forward elements of his company, while simultaneously adjusting artillery fire.

Disregarding his own safety, Captain Harrington then fearlessly maneuvered to the point of heaviest contact and, rallying his men, boldly led a determined assault against the enemy soldiers…. Largely due to his resolute determination and intrepid fighting spirit, his men overran the hostile positions and routed the North Vietnamese soldiers, accounting for twenty-five enemy soldiers confirmed killed.”

He will talk about the lessons the Marine Corps learned about urban combat from that battle – lessons that would be applied successfully in taking Fallujah, Iraq, more than three decades later. In Fallujah, the Marines isolated the city and got the civilians out, before going in with the force it would take to dislodge the insurgents.

None of those things happened in Hue. Much went wrong. “We didn’t have the right intelligence; we didn’t know what was going on.”

And the Naval artillery support was ineffective, as it came in at too flat a trajectory.

Still, the Marines did the job they were sent to do. They took the Citadel. On May 27, Col. Harrington will tell how they did it.