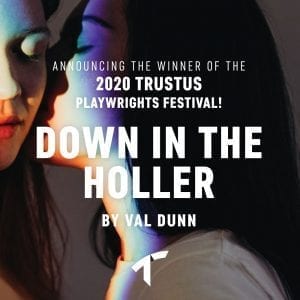 Trustus Theatre has named DOWN IN THE HOLLER by Val Dunn the winner of the 2020 Trustus Playwrights’ Festival, an annual national original works competition that was founded by the theatre in 1988. The theatre will present a reading of the winning script for free on Saturday September 26th at 2:00pm at www.trustus.org.

As the play begins, audiences are transported to a holler in the Shenandoah Valley. Juniper prepares to spend a perfect life in a perfect cabin with her perfect partner, Blake. That is, until Maeve appears in the doorway. Telling tall tales and crooning high lonesomes, Maeve beguiles Juniper return to Gin – a past self who once lived and loved in this here house. As Juniper attempts to exorcise her pursuit of passion and maintain the stable life she’s created with Blake, DOWN IN THE HOLLER witnesses a collision of class and queerness, ultimately asking how we reconcile who we were and who we thought we would become.

Trustus Theatre received over 800 submissions to the 2020 Trustus Playwrights’ Festival this year, and after much deliberation the Festival Selection Committee, comprised of Trustus Company Members, selected Val Dunn’s DOWN IN THE HOLLER. The winning script is traditionally produced as a part of Trustus’ Main Stage subscriber season the year after it is named the winner, however Trustus leadership expects this script to be staged in Summer 2022 due to the pandemic. After the reading event on September 26th, the show’s production team, including director Dewey Scott-Wiley, will work with the playwright over the next two years to finalize the script for production. 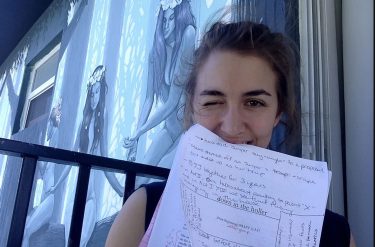 Val Dunn is a writer/deviser who creates plays, performance art, and rituals. Her work possesses a strong sense of place and tackles issues of feminism and queerness while pushing against the limitations of form. She is a member playwright of Azuka’s New Pages, Writers on the Rocks, and an alumna of the Foundry @ PlayPenn. She has received developmental support from the Orchard Project (Core Company), Signal Fire, Centrum, the Bearded Ladies Cabaret, and SANDBOX. Val holds a B.A. with honors in drama and English from Washington College where she received the Stewart Award for Drama, The Mary Martin Prize, The Jude & Miriam Pfister Poetry Prize, The William W. Warner Prize for Writing on the Environment, The Literary House Genre Fiction Prize, and was a finalist for the Sophie Kerr prize in Literature. Val has also created zines about depression, the border crisis, and late-stage capitalism.

“We’re getting very energized about creating virtual events,” said Producing Artistic Director Chad Henderson. “This reading of DOWN IN THE HOLLER will allow us to share Val’s script with our fans and followers – a show we deeply believe in and look forward to producing. This event also gives us a chance to play and stir our creative impulses. Director Dewey Scott-Wiley has embraced this new format for theatrical experience, and with the addition of virtual backgrounds, sound design, music, and film – I think this reading is going to offer much more than one would expect.”

Trustus Theatre’s newest original streaming event will broadcast on September 26th at 2:00pm at www.trustus.org. The production is free and no tickets or advance registration is required to view the performance. Donations are encouraged, and can be made at www.trustus.org.