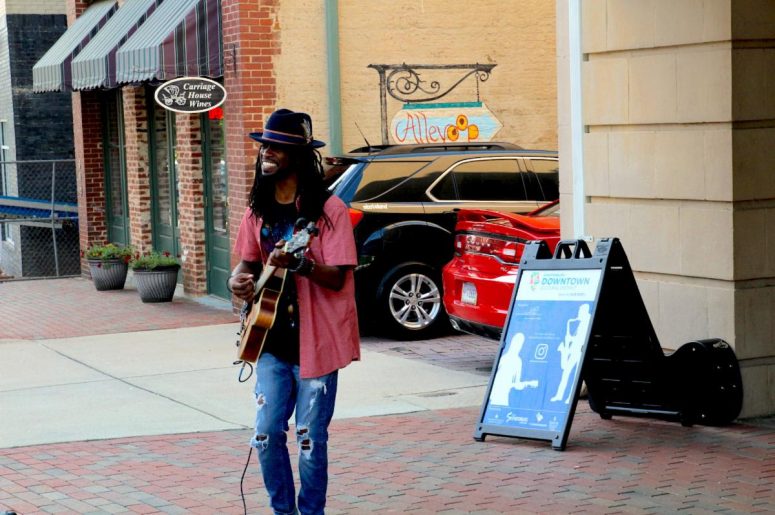 Downtown Programming is back for another season. Chapman Cultural Center is excited to announce that the street music series will be returning to the Spartanburg Downtown Cultural District this week starting Thursday, August 20th!

Since its launch in August 2017, Downtown Programming has provided over 800 entertainment experiences through weekly live music and performance “buskers”.

Downtown Programming is 100% funded by the Spartanburg Area Chamber of Commerce through the One Spartanburg initiative. The City of Spartanburg is also a valued supporter of the program.

The goals for downtown programming include increasing, pedestrian traffic, retail sales for local businesses, use of downtown parking garages, awareness of the Spartanburg Downtown Cultural District, and diversity of both performing artists and audience.

We encourage the public to safely interact with musicians while out in public by observing social distancing and through the use of face coverings when possible. Please also consider directly supporting musicians through mobile payments and tips when possible.

The S.C. Arts Commission awarded cultural district status in 2015 to the City of Spartanburg for downtown Spartanburg. The district is about four square blocks from Barnet Park to Spartanburg Community College’s downtown campus on Kennedy Street, west on Kennedy to the Grain District, and bordered on its northern edge by the Spartanburg Memorial Auditorium.

Our mission is to provide cultural leadership for Greater Spartanburg by developing, strengthening, and promoting the scope, excellence and educational role of the arts, humanities and sciences, and to further their significance in the life of our community. Visit our website to learn more.