Imagine getting a private tour of Disneyland led by Walt Disney himself. That’s how I felt as I walked the Eudora Farms property in Salley, SC, with owner and entrepreneur Mark Nisbet.

I’ve always heard that every great dream begins with a dreamer. In this story, the dreamer is Mark Nisbet who had the dream of bringing people to his 120-acre property filled with hundreds of exotic animals.

Before Corona hit, Nisbet’s business model meant animals for hire. He and his staff took the animals to fairs and fundraising events. The animals starred in birthday parties and live nativities. When his customers went into quarantine and events got cancelled, Nisbet knew he needed a plan B.

Nisbet had lots of ideas. Dreamers usually do. He had a long-term plan and a timeline, but Corona created a sense of urgency. Nisbet’s kids were home from college so he had extra hands. Time to get that drive-thru safari up and running. He set an opening date of May 8.

They sent out a few flyers and posted on Facebook. The night before opening day, he got on his riding lawnmower and cut a path for cars to follow. Successful dreamers must also be good planners. Nisbet had no idea if anyone would show up, but he had two porta-potties just in case.

That first morning, two or three cars sat waiting for the gates to open. Nisbet took that as a good sign. Two or three turned in to six or seven, and the numbers continued to grow. On busy days, 800 or 900 cars might make the trip to tiny Salley, SC.

I think everybody needs to go to Eudora Farms. You will make memories to last a lifetime, and I’d be willing to bet your first trip won’t be your last.

Here’s my recommendation, a touring plan so to speak. If you’re taking kids, buy the all-access pass. Forty dollars for a carload of up to six people lets you do everything. For adults, just do the $20 drive-thru safari. Either way, go ahead and get four buckets of food at $5 each. If you can, get two buckets of feed and two buckets of carrots.

Arrive a little before 10:00 and do the drive-thru safari first. On my second visit we started the safari around 12:30, and there was big difference with the later start. A middle-of-the-day adventure is still fun, but the animals make you work a little harder for it. Most people spend an hour and a half to two hours on the three-mile safari trail.

If you bought the all-access pass you’ll head towards the tents and park. Wutan, the appropriately named baby camel, will greet you. At eight months old, he’s playful and affectionate. He enjoyed some tug of war with the strap of my bag. The staffer told me that he might bite, but that it doesn’t hurt. She was exactly right, just felt like a mild chomp.

After hanging out with Wutan and his buddies in the petting zoo, walk all the way down to the picnic tables for an early lunch or quick snack. If you didn’t bring anything from home, the local volunteer fire department has food for sale, and there are a few vendors.

Since we missed the SC State fair, you might enjoy some pig racing while you eat. The announcer makes it fun with lots of audience participation.

Next move on to the parakeets. Ask for feeding sticks. They’re included in the price and add to the experience. You might get lost in the moment of this space. That’s the point.

After the parakeets, it’s time to meet Bubba and take a camel ride. If Eudora Farms had a super-star line up, thirty-year-old Bubba would be at the top. I’ve always heard that camels were mean and smelled bad and were known to spit, but those camels must not have been raised in the South. I found Eudora Farms’ camels delightful. Small-town camels must be like small-town people – friendly and well-mannered. The camel ride might feel like the highlight of the day, but another treat awaits. 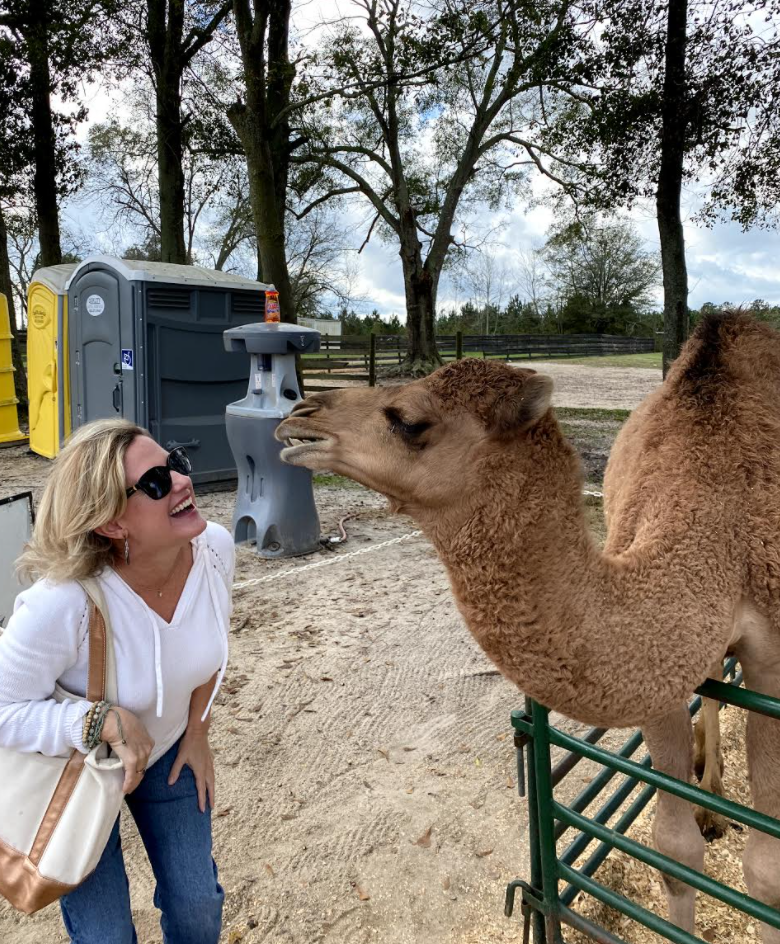 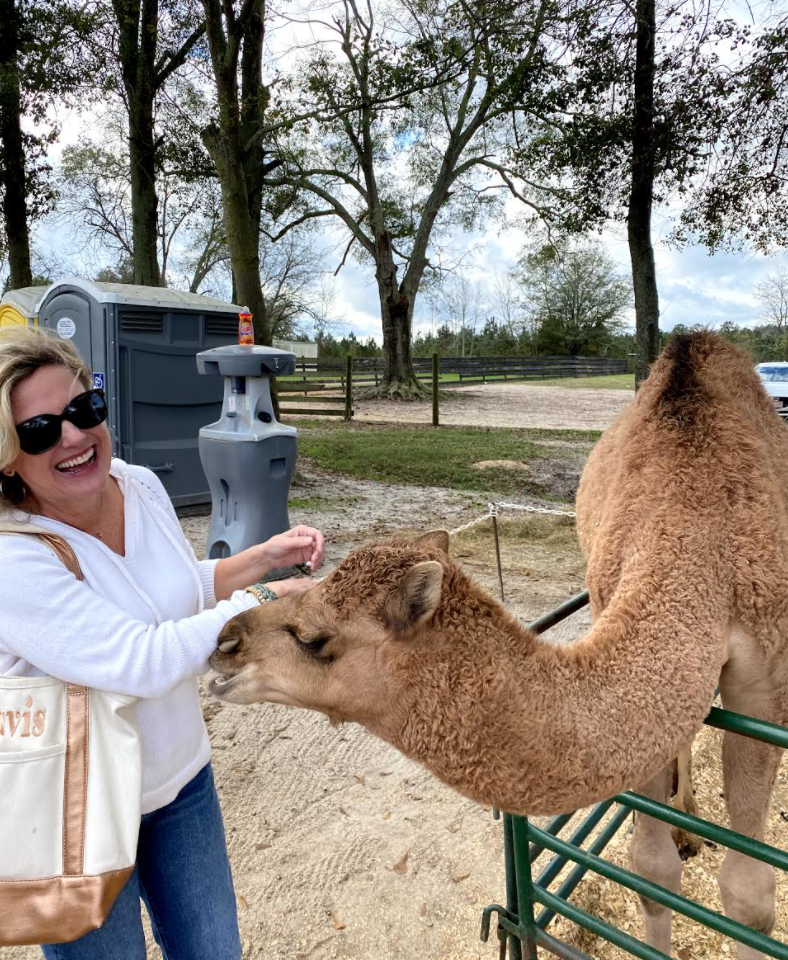 Head over to meet Elliott, the giraffe. You may feel like you’re going somewhere off limits, because this part of the farm is still under construction, but don’t let that stop you. Head to the giraffe barn and ask the staff person for carrots.  Make sure to notice the black parts of Elliott’s tongue, a giraffe’s built-in sun screen. You don’t realize how big a giraffe is until you’re standing beside a giraffe.  I’m about 5’2” and could walk under Elliot.  Eudora Farms is at that sweet spot of being busy without being crowded. Take your time and enjoy this beautiful creature.  The Elliott experience alone makes the drive worthwhile. The giraffe barn is part of what will eventually be the next phase of Eudora Farms. Yes, Nisbet has big dreams for his place.

It’s clear that Mark loves each animal on his farm. He doesn’t allow his staff to treat any animal like livestock. He says the animals are the stars of the show and should be treated as such. As we walked the property, Nisbet stopped to pick up any piece of trash. I bet Walt Disney did the same.

Nesbit is proud. He should be. His dream of a drive-thru safari is a good one, and dreams are meant to be cherished.

Tammy Davis is a teacher and a writer finding lessons and joy in everyday life. Follow her at Tammy Davis Stories on Facebook and Instagram. Visit www.tammydavisstories.com for more photos and videos of her adventures at Eudora Farms. She also has tips for groups thinking of taking kids to Eudora Farms.  If you have a Eudora Farms adventure you’d like to share, e-mail [email protected]