I spent a lot of time on Clarks Hill Lake (Strom Thurmond Lake), during my teenage and college years. I camped, boated, and skied, but over the years lake fun amused me less and less. Today I prefer rivers. A river will take you somewhere. A river will soothe you with its river song. A lake? It laps against the shore, a miniature Atlantic surf sound. Better than nothing.

Almost everyone—but not everyone—loves lakes. Many people seem to view impoundments as natural, like they’ve always been here. Outside of kayakers, fly fishermen, and naturalists, few mention rivers. Maybe that’s because we live in a region known for manmade impoundments. Clarks Hill Lake, Lake Russell, Lake Hartwell, Lake Murray, Wateree, the Santee Cooper Lakes, Lake Greenwood, Monticello and on and on. Lots of dams in the Southeast.

Dams back up rivers and perform as designed. Damming the Savannah River helped control the flooding of Augusta. It also brought hydroelectric power and a bonanza of recreational opportunities. Fishermen love the lake. Campers love the lake. Developers and realtors really, really love the lake. The taxman really loves the lake, but enough of this petty whining. It’s true that the Savannah River flooded Augusta, but the waters always receded. Once an impoundment covers the land, it stays. A lake is a permanent flood, and that brings me to what we’ve lost. What we’ve drowned. 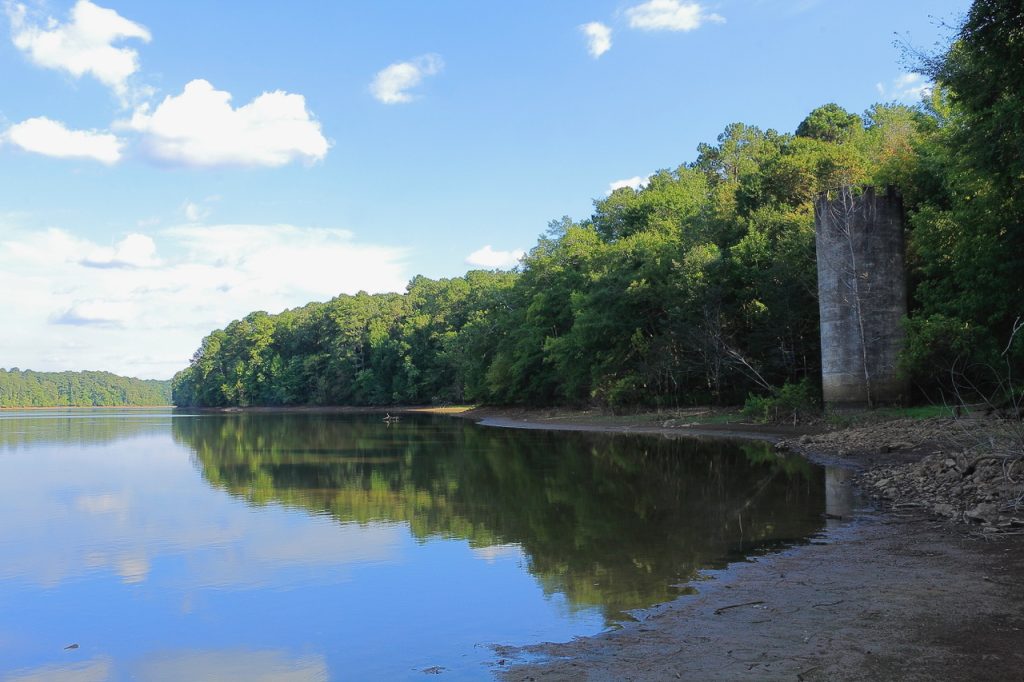 High but not dry, the old silo looks over what was once farmland.

About a year ago I spied a silo standing in Clarks Hill Lake. Several times I walked down to the waterline to see how a boat-less guy could get to this silo that looked a castle turret with a parapet. Then, despite the rains of late, the lake dropped some four feet. I saw a way to get to the silo, on foot through mud, over rocks, through beer cans, bottles, and other refuse that’s out of sight and out of mind when the lake’s up.

I don’t know the silo’s history, yet, but boaters who cross the lake here motor over what might have been a hayfield, a pasture, a place that caused a farmer to lay awake fretting. What else might lie beneath dammed waters? How about dead shoals where rocky shoals spider lilies once bloomed with their white fragrant blossoms and stalks green as bell peppers? How about the Rembert Indian Mounds up Elbert County, Georgia, way? How about the lost towns of Petersburg, Lisbon, and Vienna?

Stone bridges, stone houses, old steel bridges, Indian villages, and cemeteries? That and more lie beneath water, for the list of what we’ve drowned is long and distinguished, an archaeologist’s dream. The silo this column mentions? It stands above water for a respite, for some breathing space, a monument to all that’s out there deeper, so deep it will never see the light of day again, nor will you see it.

Lakes provide beautiful sunrises and sunsets but I especially like rivers that run free. Among my favorites are the Chattooga, Georgia’s Broad River and Little River, South Carolina’s Edisto and Black Rivers. I like, too, a creek that runs more like a river, Stevens Creek over in McCormick County.

Treat yourself. Make your way to a poem of a river at daybreak. Stand on its bank and listen. The water roars and hisses as it froths and foams over and around rocks you cannot see but know are there. Then in the faintest light, milky-white filigrees twist and braid and murmur and whisper to beget inner peace as no other sound can—the soothing silence of white water’s white noise.

If it’s easier, stand by the lake of your choice at daybreak, and you’ll hear birds and lapping waves. As the sun climbs, look out across that watery plain and wonder what’s beneath the water, for we’ve drowned a lot of our past, but now and then, like that silo, and like Petersburg, Georgia, ruins remind us of what once was.