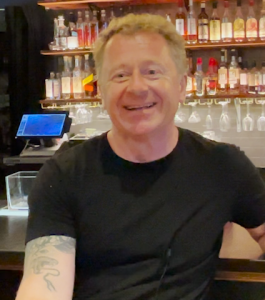 Kristian Niemi is the owner of two restaurants in Columbia, South Carolina, Bourbon and The Black Rooster. He started in the local restaurant scene when he joined Bill Dukes to help launch the Blue Marlin in the Vista, a restaurant that still exists today. In 1995, he entered the restaurant as owner when he and a few co-workers from the Blue Marlin purchased Mr Friendly’s in Five Points.

Bourbon is a whiskey bar and Cajun-Creole restaurant located just steps from the South Carolina State Capitol building at in the historic Brennen Building. They specialize in bourbon, whiskey, craft cocktails and the flavors of the Louisiana Bayou. They currently have the largest whiskey list in South Carolina.

Their kitchen, headed by Chef Josh Wilson, crafts Cajun-Creole classics like gumbo, jambalaya and etoufee, as well as dishes based on locally-sourced ingredients.

Their Bar Manager, Kat Hunter, has been named “Bartender of the Year” by the South Carolina Restaurant and Lodging Association, and has been featured in major publications including Southern Living, Local Palate, and more.

Kristian is a veteran, a world traveler, a hockey player, and someone who has made a profound impact on the downtown of Columbia, South Carolina.

Below is a full audio podcast version of our conversation with Kristian Niemi. You can also listen to this podcast on Apple and Spotify. Just search WhosOnTheMove SC.