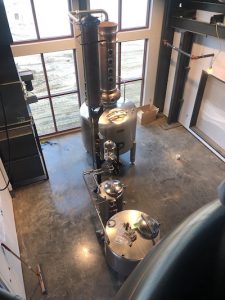 Just recently, the team worked to set its brand new, 500-gallon Vendome Copper still—the largest still the distillery has operated since its inception in 2006. This top-of-the-line still is one of two that were set (the other being a 50-gallon still), and will produce its first batch of bourbon at the new 25,000 SQFT distillery February 29th, 2020 on Leap Day.

Vendome stills originated in Kentucky bourbon country and are used by the leading bourbon distillers in the country. Firefly is the only distillery in Charleston with a still of this caliber, which is reflective of its expanded craft spirits line. As construction continues at the new location, the distillery looks to open to the public early 2020.