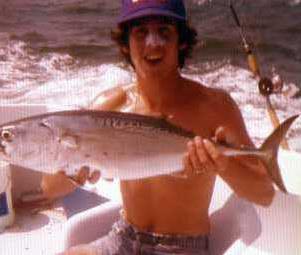 FISHING IS SPIRITUAL. Not sure why or how. But I believe there’s something unusually spiritual about it. The disciples were fishermen. There was the well-known miracle catch of fish. There was the miracle of the loaves and the fishes. Jesus talked quite a bit about fishing. Jesus ate fish with his disciples. He even ate fish after He appeared to the disciples following his crucifixion and resurrection. The earliest Christian symbol is a fish.

So there is something spiritually significant about fishing and fish: I’m just not entirely sure what it is.

Anyway, I’m not a fisherman, though I remember once as a boy wanting to be a fisherman when I grew up.

I remember my first fish, caught at Yaupon Beach, N.C., when I was no more than six or seven-years-old and fishing with my Uncle Eugene “Gene” Germino, a soft-spoken former U.S. Army officer who served in combat with Patton’s 3rd Army during World War II.

Later when I was about 10, one of my greatest boyhood adventures was fishing in the storied Cooper River at Charleston, S.C., with my humorously curmudgeonly old Uncle Tommy Gregg, also a WWII veteran, who often tried to convince me and others that his particular service in the Army Air Forces was singularly key to winning the war.

I fished with my dad a good bit; and Dad, a Korean War veteran, fished a lot more with my larger-than-life Uncle Bob Clark who once even fished off Cuba in the 1950s during the pre-Castro days when Batista was still in power.

Though I was too young to venture out on the great Santee, S.C., fishing expeditions of the early 1960s, I remember there was something fascinatingly mysterious about the older boys and men who geared-up and embarked on those fishing trips from Uncle Bob’s lakehouse at Santee. I remember they did a lot of night fishing for catfish – “knuckle-busters” as Dad used to call them – and I thought that was cool.

Then there were fish fries (another story with wonderful memories we’ll save for another time); the best being the huge fish fries at my dad’s tire dealership, R.H. Clark Co., yes, the namesake of my Uncle Bob, where I worked as a pre-teen and a teenager. There my boss John R. Davis, a U.S. Army veteran during the earliest years of the Vietnam War, had us put huge sheets of plywood on automobile hydraulic-lifts and raise the lifts high enough that they became giant tables. He and others then floured and cooked fresh-caught fish along with hushpuppies and grits cooked in huge vats. I don’t know if it was the adventure of eating in the bays where we worked or the cooking, but I’ve never eaten better in my 62 years.

As a teenager I also fished with my friends in nearby Lake Wateree, also neighborhood ponds, the rocky Congaree River, and often alone atop an isolated spillway along a creek near Lake Murray. Though not as much as some might think. Hunting was more my game.

Though perhaps my most memorable fishing trip was in the blue waters off Hilton Head where the seas were so rough that everyone was sick and below deck except myself and my girlfriend’s Uncle Charlie Noulles, a former B-17 ball-turret gunner who shot down several German fighters during WWII (two of which are documented in the book, “Black Thursday”).

I was 16 at the time, fascinated by Charlie’s war stories, thrilled by the high-seas adventure we were on, and hopeful for a huge trophy. I did manage a sizable bonita for a boy that day [pictured here].

Later in college, I fished a few more times with Dad and a business associate of his off Goat Island, S.C., near Santee. Then there was again Lake Wateree with Dad’s buddies Sam Allen and Billy Jamison, also a WWII veteran who regaled me with fantastic stories of battling Japanese sappers and kamikazes in the Western Pacific.

When I was in the Marines, we fished a little. A few of my buddies fished on Okinawa. We fished off Korea. We fished on some of the Caribbean islands. And when the various ships on which I was embarked occasionally stopped in the middle of the ocean for an all-hands “swim call,” some guys fished (mostly sailors). Most guys swam (some sailors and nearly all of the ship’s Marines). I usually swam or pulled shark-watch duty with my rifle.

Back home, I regularly drove the boat for my Uncle Gene and Uncle Hugo Germino’s fishing mini-expeditions on Lake Murray when they visited my family in the summers.

But when I got married, fishing, well, it ended. For whatever reasons, my interest in the sport waned. Though following my divorce, I did fish from a dock and a canoe a little bit when I lived for a brief period on Lake Murray.

Still and all, I see the spirituality in fishing. Though I think I see it through the people who fish and who fished. Of course, most of the men I previously mentioned are now gone. But today both of my nephews Michael and Max are master fishermen. Both are far more accomplished in the sport than I ever was. Several of my closest friends and Christian brothers still fish – Skid Logan, Lee Turner, a few others. My friend Tom Mullikin not only fishes, but dives with the sharks (that too is another story). One of my buddies, Tom Ryan, is a professional fisherman and fly-tying expert who teaches people to fish while teaching them about the Lord.

Point in all of this? There is something very special – even spiritual – about fishing. Not sure what it is, how it is, or why.