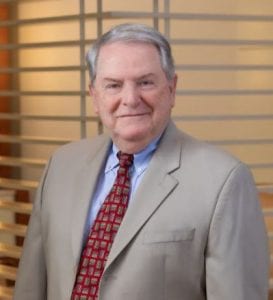 Former Director of the South Carolina Department of Revenue (SCDOR), Ray Stevens has joined the Nexsen Pruet law firm to assist clients with state and local tax needs.  Stevens served as the Director of SCDOR during the administration of Governor Mark Sanford.

“The businesses and professionals we serve need attorneys like Ray,” said Leighton Lord, Nexsen Pruet’s Board Chairman. “The tax code is incredibly complex so a simple miscalculation or misinterpretation of the law can lead to huge swings on tax bills. Having Ray, Rick and Burnie on one team will help ensure our clients are paying what is proper and nothing more.”

Throughout his distinguished career, Ray Stevens has briefed and argued more than 30 cases before state appellate courts and before the United States Supreme Court. He has also represented clients before the Federal District Court, the Fourth Circuit Court of Appeals, and has tried multiple tax cases in state circuit courts.

Before joining Governor Mark Sanford’s cabinet in 2006, Stevens spent a decade as a judge on the South Carolina Administrative Law Court. For 15 years, he worked for the South Carolina Attorney General’s office, ultimately serving as the Director of the Tax Division. In 1993, while with the AG’s office, he originated and successfully argued the theory of law taxing income from intangibles in Geoffrey, Inc. v. South Carolina Department of Revenue and Taxation. Now, the case is simply known as a “Geoffrey issue” in state taxation matters.

Nexsen Pruet is a business law firm with more than 200 professionals in eight offices across North and South Carolina. The law firm provides regional capabilities with international strengths.