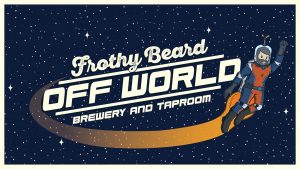 Frothy Beard Brewing Company is expanding its universe as it opens a new brewery and taproom in historic downtown Summerville. The new venue—the Lowcountry brewer’s second location in the Charleston area—is called Frothy Beard Off World. Expected to open in early summer, Frothy Beard Off World will be a community-oriented gathering space for beer lovers, space aficionados, and families alike.

The Summerville Square location will be home to 40 taps with a variety of beer styles, including the Frothy Beard staples customers have come to know and love, and will serve a different menu concept than the West Ashley location, including a Sunday brunch menu. The brewery will also serve as a platform for a rotating menu of local, specialized guest brews.

“Over the past eight years, we’ve been proud to be a member of South Carolina’s burgeoning craft beer industry, riding the ups and downs of owning and operating a craft brewery,” said owner and general manager Michael Biondi. “Now, we’re extremely excited to expand to a second location, and I’d like to thank the fans who’ve stuck with us since the beginning and the new ones who’ve joined us along the way for making this expansion possible.”

Frothy Beard Off World will be located at the current location of Homegrown Brewhouse, which has been acquired by the partners of Frothy Beard Brewing Company. Frothy Beard originally opened in 2013 with a location in North Charleston, moving to its current West Ashley location on Sam Rittenberg Boulevard in 2017. This expansion brings the company close to its original home location, and the Frothy Beard team is looking forward to serving their growing fan base in Summerville and the surrounding communities.

In its campaign to announce the concept of Off World to the public, Frothy Beard ran an interactive social media marketing campaign showing Finn—the brewery’s mascot—embarking on a new adventure. Boldly going where no beard has gone before, Finn blasted off from the West Ashley headquarters in search of his new colony, ultimately landing his search mission in Summerville.

Additional details of the new location opening this Summer will be forthcoming. Until the facility has been converted, it will continue to operate as Homegrown Brewhouse. In the meantime, the public can follow Finn’s adventures on Frothy Beard’s social media to stay up-to-date.