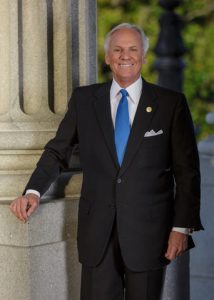 Today, Governor McMaster announced that the South Carolina Department of Insurance (DOI) has issued an order designed to crack down on bail bondsmen who fail to report a criminal defendant’s non-compliance with court-ordered bond conditions.

As part of Governor McMaster’s ongoing efforts to close the revolving door for violent criminals and repeat offenders, the Governor directed DOI to explore opportunities to utilize DOI’s licensure authority and administrative jurisdiction to enhance oversight of the commercial bail-bond industry, which is also regulated by county clerks of court.  Governor McMaster also instructed DOI to establish a process that would enable prosecutors to submit complaints regarding bondsmen to DOI for evaluation regarding any available regulatory action or possible criminal referral.

A copy of DOI’s Order is available here.

“Any comprehensive effort to close the revolving door of repeat offenders and violent criminals must hold bad actors in the bail-bond industry accountable for refusing to do their job,” said Gov. Henry McMaster. “We’re opening lines of communication between prosecutors and the Department of Insurance so bad actors are appropriately dealt with and we’re making it more difficult for them to go undetected. From now on, if a bondsmen is caught coddling a criminal, they will lose their license to operate in South Carolina.”

Specifically, the order requires bondsmen licensed by DOI to report any notifications that a defendant has violated court-imposed bond conditions or terms of pretrial release, to verify the defendant’s non-compliance, and if confirmed, to follow certain procedures to have the defendant surrendered to the court or the detention facility pending further action by the court. The order also establishes a statewide, standardized process by which prosecutors can refer complaints to DOI regarding the failure of licensed bondsmen to comply with court orders or applicable provisions of South Carolina law. The order further notifies licensed bondsmen that DOI will promptly investigate complaints and initiate any appropriate disciplinary proceedings or enforcement action against licensees, to include suspending or revoking a bondsman’s license or imposing civil penalties.  In reviewing complaints from prosecutors or law enforcement officials, DOI will refer any allegations or evidence of criminal conduct to the South Carolina Law Enforcement Division or the Attorney General for further investigation and potential prosecution.

“Good bail bondsmen are essential to an effective criminal justice system in South Carolina,” said 9th Circuit Solicitor Scarlett Wilson, who has advocated for bond reform. “Unfortunately, grifters and other opportunists have infiltrated the bail bond business and their profiteering continues to threaten our safety. The Governor’s Order will help weed-out unsavory bondsmen who aid and abet violent criminals who continually wreak havoc in neighborhoods across our great state.”

DOI does not regulate electronic-monitoring companies and traditionally has not been involved in regulating the commercial bail-bond industry outside of the licensure and administrative context; however, the agency has recently received reports regarding bondsmen and bail-bond entities failing to comply with South Carolina law and court orders.  Examples of non-compliance include, but are not limited to, failing to report a defendant’s violation of court-ordered house arrest or home detention, ignoring a defendant’s violation of GPS or electronic-monitoring restrictions, or failing to report other violations of other terms and conditions of bond.

“We want to make sure that bondsmen are fully aware of their responsibility not only to ensure that defendants show up for court but also to take action upon notification of a defendant violating the conditions of their pre-trial release,” said Acting Director of the Department of Insurance Michael Wise.

Last month, the Governor previewed his 2023 Public Safety Proposals for the General Assembly, which featured sweeping criminal justice initiatives aimed at reforming the bond and sentencing processes in state courts.  Governor McMaster’s Public Safety Proposals called on the General Assembly to pass legislation next session to eliminate “catch and release” for dangerous offenders by enhancing state-level oversight of bail bondsmen, establishing minimum standards for court-ordered GPS or electronic monitoring, and imposing penalties on bondsmen who fail to maintain electronic monitoring or report violations of bond conditions to court.