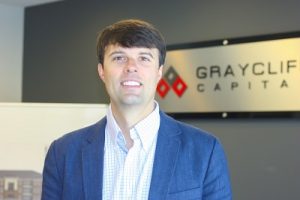 Graycliff Capital Partners, LLC (Graycliff Capital) is pleased to announce that Seth Peterson, Director of Development, is among the elite group of Upstate professionals to be honored in GSA Business Report’s 2021 “Forty Under 40” recognition program. Based in downtown Greenville, Graycliff Capital is a leading multi-family development and investment company with focus on the Southeast and Mid-Atlantic regions.

GSA Business Report’s Forty Under 40 Awards recognize success and community involvement of 40 professionals under age 40 who are making their mark on the Upstate from a mix of industry, professional and community sectors.

As Director of Development for Graycliff Capital, Peterson is at the forefront in carrying out the company’s mission to provide market rate, multi-family rental housing at affordable rates in growing markets. When he joined the Graycliff team in April 2015, Graycliff had historically delivered 414 units since its inception in 2010. During his six years with Graycliff, Peterson has been directly responsible for the development of 2,600+ units, with an additional 2,000+ in the pipeline for future construction across four states. This equates to 12 properties with a combined total of $500+ million in completed transactions.

Peterson articulates the purpose-driven nature of his job as follows: “At Graycliff, we believe in ‘smart growth’ by building in locations with existing infrastructure, nearby to grocery and retail, and connectivity to the surrounding area. We also aim to create a sense of place at each community by designing sidewalks, green space, and unique amenities, such as dog parks, fitness centers and signature pools.”

Two examples of popular Upstate South Carolina developments initiated and brought to fruition by Peterson include Cotton Mill Apartments, a high-profile, historic renovation of a dilapidated mill in the heart of downtown Simpsonville; and Waterleaf at Keys Crossings, a new Greenville development for which Graycliff repurposed an underutilized property conveniently located near the I-85/I-385 interchange. Tribute Verdae Apartments is a current development under Peterson’s direction that stands out for its positive contributions to the Greenville community as a mixed-income residential neighborhood.

“Providing quality workforce housing is a critical component to not only attract new industries, but employee retention by co-locating housing near job hubs,” said Peterson.

Peterson earned his Bachelor of Business Administration (BBA) – specializing in Real Estate Development – from the University of South Carolina in 2007, followed by a Master of Real Estate Development (MRED) degree from Clemson University in 2014. Peterson enjoys giving back by mentoring young professionals and students in the Clemson MRED program. This involvement ranges from talking to prospective students about the industry, to assisting them with their job searches and employment opportunities.

His professional credentials include a South Carolina Broker’s license and select memberships that offer Continuing Education, including the Urban Land Institute (ULI) and the National Multi-Housing Council (NMHC).

Peterson and the other Forty under 40 honorees will be individually spotlighted in a special print edition of GSA Business Report scheduled for publication on September 6, 2021.

Graycliff Capital in the Carolinas

Over the past decade, Graycliff’s geographic reach has extended beyond the Carolinas to other parts of the Southeast, including Tennessee. Graycliff’s portfolio also includes multi-family communities in the Mid-Atlantic region, as well as Ohio, Pennsylvania and Utah.

Headquartered in Greenville, S.C., Graycliff Capital Partners is a multi-family development and investment company with focus on the Southeast and Mid-Atlantic regions of the United States. Since its founding in 2010, Graycliff has acquired and developed more than 11,216 apartment units, executing approximately $1.95 billion in transactions. Graycliff’s core strategy is based on investing in areas with established economic growth and high barriers to entry. Graycliff is passionate about supporting local non-profits making positive impacts in their respective communities. For more information, visit www.graycliffcapital.com.