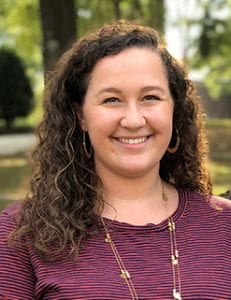 The fall, she said, is “the opportunity for us to innovate.” Greek Life this year is transitioning to virtual recruitment, and Buck has shared with students this is a time the organizations can adapt and program in new ways.

“These expectations of what a social life on campus looks like and what Greek Life as a social experience looks like is constantly changing,” she continued, “but I think that it’s definitely a testament that all of these organizations have withstood the test of time of coming together for friendship and connection.”

In addition to her work at PC, Buck has recently taken on several volunteer roles with the National Panhellenic Conference (NPC) to help advise chapters in other parts of the country and enhance the Greek experience back on campus.

NPC, the governing body of all Panhellenic sororities, offers a support network to campuses to provide resources and assistance. Area advisors are volunteers who guide local advisors and can answer questions related to operations, policies and procedures, according to Buck.

They are generally paired with similar schools and to those they are not connected to directly, she said. She will take on the volunteer role over the next two years.

“It’s nice because not only am I sharing, advising information with these chapters, and these Panhellenics, but I also get feedback from them,” she added. “For example, how they are conducting virtual recruitment this year … (and) how we can bring back those things to our campus and implement best practices.

“Not only am I volunteering for other Panhellenics, but I’m also getting feedback that I can bring back to support our Panhellenic.”

Also through the NPC, Buck will serve as a facilitator for a few programs including an interactive, community-building experience for Panhellenic communities called Something of Value.

The program fosters connection, empowerment and influence across communities to impact cultural norms and advocate for campus members’ health and safety.

She will either travel to or virtually visit campuses across the country to facilitate and bring the program and information to other chapters and campuses. Although she will not be able to bring the program in its entirety to PC at this time, she said she plans to coach the program in smaller ways to students.

There are 300-500 Panhellenic officers and fraternity and sorority advisors who come to the program, and she will help to deliver content on specific officer tracks like judicial roles and recruitment roles.

Buck, a member of Delta Zeta sorority, also serves as a facilitator for the Alcohol Skills Training program. Through this, chapters with the program educate members on safer behaviors surrounding alcohol consumption.

These new roles are something she values, as she works with students on campus at this time. She says she’s reminding them that even if they don’t have the same face-to-face social aspect in large groups or meetings, the organzations’ value remains.

“There’s still that connection that we value the same things, and we are friends,” she said.