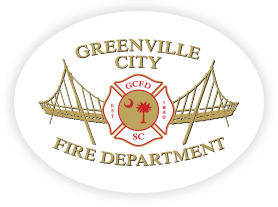 The Greenville City Fire Department (GCFD) is urging residents to stay safe when celebrating over the July 4th holiday weekend. According to Fire Marshal Tristan Johnson, fire officials strongly discourage the consumer use of fireworks and encourage residents to find alternative ways to get into the patriotic spirit.

“With many professional fireworks shows being canceled this year, it is more important than ever to remind residents that celebration often turns into tragedy with the improper use of fireworks,” said Johnson.

According to the National Fire Protection Association (NFPA), more than 19,500 reported fires are started by fireworks annually and fireworks cause thousands of injuries each year. The U.S. Consumer Product Safety Commission’s 2018 Fireworks Annual Report showed that burns account for 44% of the 9,100 injuries treated in emergency rooms in the month around July 4th. Sparklers, which burn at 1,200 degrees and are hot enough to cause third-degree burns, account for roughly one-quarter of emergency room fireworks injuries. Children ages 10–14 had the highest rate of fireworks injury, with more than one-third (36%) of fireworks injury victims under age 15, and boys are two times more likely than girls to be injured by fireworks.

“If residents choose to use fireworks, we want to make sure they make informed purchases and take the appropriate precautions to keep themselves and their loved ones safe,” said Johnson. “We also want to remind residents of the City’s fireworks ordinance.”

In November 2019, City Council passed an ordinance that prohibits individuals from using, discharging, shooting or igniting any fireworks or similar explosives between the hours of 10 p.m. and 9 a.m.; however, the ordinance includes an exception that allows extended hours for New Year’s Eve and July 4th. As a result, the discharge of fireworks in the city of Greenville is prohibited after 12:30 a.m. Saturday night.

According to Johnson, you must be 16 or older to purchase fireworks, and you should only purchase them from an approved fireworks retailer. Fireworks cannot be sold from a tent or vehicle, and all fireworks stands must be inspected by the State Fire Marshal’s Office. Once a fireworks stand passes the state inspection, GCFD is notified and performs its own inspection to ensure that the building has a fire extinguisher, that no flammable liquids are stored inside the building and that the building meets the City’s overall safety regulations. Approved fireworks stands should have two permits – one posted on the outside of the stand, and one posted inside the stand, along with a retail license. Additionally, fireworks sold to the public can only have 50 milligrams or less of pyrotechnic composition per firework, so fireworks such as M-80s and Cherry Bombs are illegal. Both illegal fireworks and fireworks from an unlicensed stand can be confiscated by law enforcement or the State Fire Marshal.

Greenville City Fire Department encourages residents to look for other ways to celebrate this July 4th and has compiled some fun, creative alternatives to fireworks: