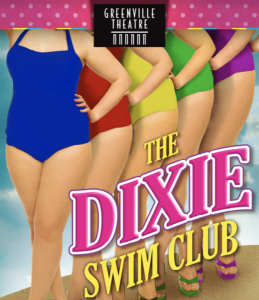 After 16 months without any live performances, Greenville Theatre is reopening with the hilarious and touching comedy The Dixie Swim Club. This is the first production under the new leadership of Producing Artistic Director, Max Quinlan.

Based on the book by Jamie Wooten, Jessie Jones, and Nicholas Hope, this delightful production tells the story of five southern women who started their friendship on their college swim team and meet every August to catch up, laugh, and meddle in each other’s lives. As the years pass, these women rely on one another to get through life’s challenges, including some hilarious and unexpected twists and turns.

“This is the second time I’ve been lucky enough to perform in this amazing show. I’m especially glad to take on the role of Vernadette this time, who is positive in spite of her many troubles in life,” said Beth Munson.

“It is great to be back to theatre after such a long hiatus,” said director Suzanne McCalla. “And this play celebrates relationships and enduring friendships, which makes it particularly relevant after many long months of isolation.”

For more information or to purchase tickets, please call the Box Office at 864-233-6238 or  visit the GT website at www.greenvilletheatre.org.

Greenville Theatre Box Office is located at 444 College Street on Heritage Green and is open  Monday through Friday from 11am – 4pm.