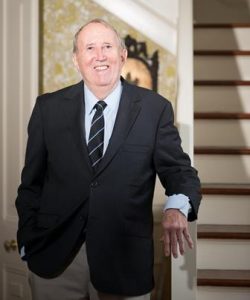 The Columbia World Affairs Council announced the esteemed 2020 Global Vision Award will be given in honor and remembrance of the late Harry Arthur Huge, Honorary Consul of the Republic of Estonia for South Carolina, attorney, venture capitalist, and philanthropist. Mr. Huge passed away on April 27, 2020, at the age of 82. This is the 27th year the Columbia World Affairs Council has presented the award to a leader whose contributions have made a significant impact on projecting South Carolina globally.

Regretfully, this is the first year the award will be given both posthumously and without a black-tie gala during the year of recognition. The annual Global Vision Award Dinner has been postponed in regards to public safety during the global COVID-19 pandemic and an official presentation to the Huge family will take place as soon as possible in 2021.

During his long career as an attorney, Mr. Huge was involved in several landmark cases and represented thousands of families of 9/11 terrorist attack victims. Three books have been written about his trial work. Mr. Huge was actively involved in the civil rights movement, serving as President of the Voter Education Project in Atlanta, which registered black voters throughout the South, and co-authored articles in the New Republic.

Mr. Huge served from 1977 to 1981 as a member of the President’s General Advisory Committee on Arms Control and Strategic Weapons, advising the President directly on the SALT II treaty and the ability to verify the Soviet missile arsenal. The experience led him to Estonia, where in the late 1980s Mr. Huge devoted his energy to the country’s independence, then-occupied by the Soviet Union. On the eve of Estonia’s restoration of independence, he represented Estonia’s interests in Washington, and Estonia awarded him with the Medal of the Order of the Cross of Terra Mariana in 2006. He served as Estonia’s Honorary Consul for South Carolina since 2010.

In 2005, Mr. Huge and his wife established The Harry and Reba Huge Foundation, which has provided merit scholarships to students at Honors College at The College of Charleston, The Citadel, Mr. Huge’s alma mater Nebraska Wesleyan and two prominent universities in Estonia—University of Tartu and Tallinn Technical University. Mr. Huge also worked diligently to foster educational, cultural and economic exchange among the universities as well as between the governments of South Carolina and Estonia.

“Through his support of the Council, Mr. Huge brought valuable connections to the Midlands and contributed greatly to a better global community,” said Bob Coble, former Columbia Mayor and Chair of Columbia World Affairs Council Board of Directors. “His legacy connecting Estonia and South Carolina as well as his educational philanthropy for students and young entrepreneurs will continue to benefit our State for generations.”

In 2016, Mr. Huge led a Columbia World Affairs Council mission to Estonia which resulted with the Agreement between the Government of the Republic of Estonia and the Government of the State of South Carolina on Bilateral Cooperation in Industrial and Technological Research and Development. In 2017, he oversaw a return visit to Estonia with an expanded Columbia World Affairs Council delegation—including representatives of the South Carolina Department of Commerce, the University of South Carolina, economic development officials from Richland County and the City of Columbia, and private investors—further strengthening collaborations between the two regions with economic development and university partnerships focused on information technology, cybersecurity, and artificial intelligence. In 2018, the South Carolina-Estonia Industry R&D Program formally began calls for bi-national project proposals.

“Mr. Huge’s passion and vision will have a distinct and lasting impact on South Carolina’s students, companies, and government,” said Dickson Monk, Executive Director of the Columbia World Affairs Council. “It is the Council’s privilege to honor him with the 2020 Global Vision Award.”

Mr. Huge has served on many boards, including the Hollings Cancer Center at the Medical University of South Carolina where Mr. Huge served as its first Chairman of the Board for 8 years, the Spoleto Festival, and the South Carolina Aquarium. In addition, he has received honorary degrees from Nebraska Wesleyan University (2005), College of Charleston (2017), and, posthumously, The Citadel (2020). A full biography and more information can be found at thehugefoundation.org.