On my way back I crossed Clarks Hill Lake twice. In soft early evening light, the water lay like a mirror. Smooth as glass as we like to say. Shoreline reflections rendered perfect hourglass illusions, like some fine photograph. Water mirrors people. It’s moody and can present a calm face or gravity can anger it. Just hours earlier I had watched water rage, funnel, twist, and smash against rocks. Other rocks it glided over in glassy bell-shapes, smooth as silk we like to say. I had spent the afternoon watching the Chattooga pass by as it ran from its headwaters in North Carolina to its appointment with the Atlantic down Savannah way. It’s a great run until a dam backs up the Tugaloo River. 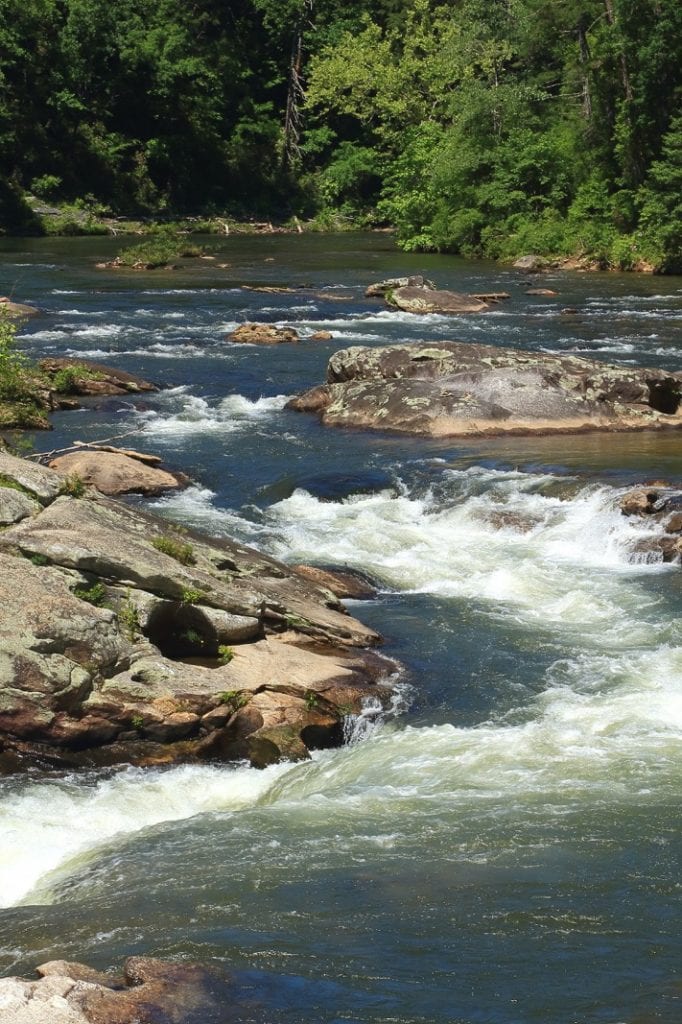 The approach to Bull Sluice

You will find the Chattooga’s headwaters in southwestern North Carolina where the Blue Ridge makes a steep rise to the 4,000-feet Highlands Plateau. Here half-a-billion year-old granite creates a landform with a majestic name, the Blue Ridge Escarpment. “Escarpment.” It’s one of those words you never forget.

In a bold landscape of granite cliffs the Chattooga sets out near a North Carolina town I first heard of from mother. The way this name sounds is beautiful, poetic, and a tad monetary: “Cashiers.” That’s “cashers,” as in people who turn your checks into cash. The uninformed say “Cash-sheers.”

“We drove up through Cashseers. It’s pretty but expensive.”

All I read and hear says the Chattooga gets its birth waters from Whiteside Mountain near Cashiers. I don’t want to know if anyone has ever found the spot, pointed, and said, “See that spring? Right there is where the Chattooga begins,” but I’d like to be that person. As I move through the autumn of my life, I need one great adventure, just one great adventure of the outdoor kind—the real world where rocks, water, trees, plants, sky, and animals give us the best this world can offer. Man sure doesn’t give us anything that can beat nature. When I listen to the Chattooga roar, when I watch mists rise from rocks, I know that water is as alive as any panther that once stalked its banks. That’s why when life lets me, I drive up to this wild and scenic river that carves the boundary between Georgia and South Carolina, and life lets me do that once a year.

The Chattooga. It twists and turns as a map of the upper border between Georgia and South Carolina reveals. In places two people can stand on either side of the water and almost shake hands. That peaceful gesture belies the violence this river can wreak. A lot of people have died here. I myself had a scary encounter with the river at a place called Seven-Foot Falls. Even so, I want to do two things before my time ends. Run the river again, and look for its headwaters.

The federal government designated the Chattooga a wild and scenic river in 1974, and that it is. If you, like me, yearn for one great adventure, the very least you can do is drive up to the Highway 76 bridge and park on the South Carolina side. Take the trail down through mountain laurel to the Bull Sluice observation point. Listen to the river roar and pretend you’re about to explore the river’s upper reach. “I’m gonna follow that river till I can’t follow it anymore. Then I’ll rest and sip cold pure spring water and consider that for once I truly lived.”

That’s what I want. Just one great adventure. It remains a fantasy for now, but life is a twisting, moody river. We know where it began but who knows where it will lead.