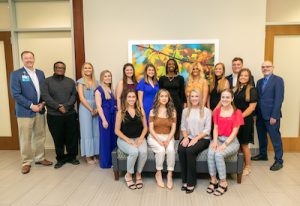 Coming from a manufacturing background, Self Regional Healthcare’s Vice President of Human Resources Brent Parris said he used to think of his job in terms of making widgets. His perspective changed, however, when he made the switch to the health care industry.

“A big reason for me joining Self Regional Healthcare was because I understood the human part of what we do in health care,” he said. “As you start your nursing journey, I would encourage you to never lose the humanity of what it is we do, because that human part is so key.”

Parris’ remarks were given during a banquet hosted by Self Regional, as the local health care provider and Lander University honored rising junior nursing majors who were named to the first cohort of the Self Regional Scholars Program on Thursday, Apr. 28. Established earlier this year, the scholarship opportunity is offered annually to Lander’s highest performing nursing students who demonstrate exceptional academic performance, community involvement and career potential, among other characteristics.

The scholarship program is part of Self Regional’s larger efforts to be a health care provider of choice in South Carolina. “We want to create an environment here that provides high-quality care and an excellent experience for every patient who seeks care with us,” Dr. Matt Logan, CEO of Self Regional, told the nursing students, encouraging them to consider a career with Self Regional after graduating from Lander. “We know that graduates of Lander University’s School of Nursing are well-trained and set up for future success.”

“I want every single one of you to come work for us,” he added, enthusiastically. “I would love for you to have your whole career with us, because I know Lander provides excellent training.”

That high level of support for Lander’s School of Nursing will soon be evident in the community. As part of their scholarship gift, Self Regional’s name will also be proudly displayed alongside Lander’s on the University’s future, state-of-the-art nursing facility, as well as the recently opened Nursing Skills Simulation Center. The gift comes at a time when the health care industry is facing an unprecedented shortfall of qualified, baccalaureate-prepared nurses. According to the American Association of Colleges of Nursing (AACN), a number of factors – including nurses nearing retirement age, changing patient demographics, and increasing stresses leading to burnout – are contributing to this national shortage, which is expected to hit the U.S. South and West regions hardest through 2030.

Closer to home, a 2017 study by the U.S. Department of Health and Human Services’ Health Resources and Services Administration ranked South Carolina fourth in the nation for states predicted to have a nursing shortage in the next decade. This trend has only been exacerbated by the ongoing COVID-19 pandemic.

The Self Regional Scholars Program aims to curb this shortfall by building a strong pipeline of qualified nursing graduates for community and regional hospitals and health care facilities. Using a holistic application process, the Self Regional Scholars grant selection committee will each year choose a limited number of upper-level junior nursing majors to receive the $10,000 award, with preference given to students from Greenwood, Laurens, Edgefield, Abbeville, McCormick, Newberry and Saluda counties (GLEAMNS).

“The Self Regional Scholars Program further expands Lander’s academic-practice partnership with Self Regional Healthcare, and provides Self with an additional year of contact with our best and brightest students,” Dean of Nursing Dr. Holisa Wharton said at the announcement of the program earlier this year. “The program will also help Lander expand its efforts to recruit and support diverse students from the GLEAMNS region, in the hopes that they will begin their career as baccalaureate-trained nurses in our local communities.”