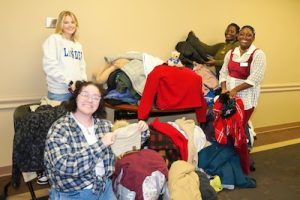 A Bearcat plush toy found a comfy place to snuggle among piles of clothing and blankets collected at Lander University during the Homecoming 2022 celebration.

In between a range of activities planned for laughs and fun, Lander students, faculty and staff took time to donate coats, sweaters, socks and more for Meg’s House, which provides shelter and supportive services for victims of domestic violence in Greenwood, McCormick and Edgefield counties.

Janae Hush, of the Lander Homecoming Committee, said the opportunity to be involved in service projects “gives students a sense of reality … some people have to deal with serious challenges.”

A senior majoring in history, Hush, of Charleston, said, “Lander is a community campus. We are very much a part of a greater community. It is vital that we help those around us.”

The spirit of community was something that Camryn Jenkins, of Columbia, felt from the moment that she visited the Lander campus. Jenkins, who was visiting another university in the Upstate as part of her college tour experience, said she saw a sign on the interstate for Lander and decided to schedule a tour.

A few weeks later, she made her decision. “Lander felt like home to me. I was drawn to the campus and people here.”

Jenkins, also a member of the Homecoming Committee, said student organizations have the opportunity each year to compete for the coveted Bearcat Cup by participating in activities throughout Homecoming Week. Teams can collect a maximum of 100 points for being involved in the week’s events. The clothing drive for Meg’s House gave students the opportunity to earn extra points – a great boost for winning the cup.

“The points add up,” she said. “This event makes a difference.”

The sorority collected coats, hats and socks for children, she said, as well as items for adults.

“Too many of us have things in our closets that we don’t wear or we’ve never worn. Someone out there can benefit from these pieces of clothing that are taking up space,” said Stewart, the risk management director for Phi Mu. “If I can’t use it, why not share it with someone else.”

Hush said that more than 200 donations were received, with at least 50 jackets and coats being donated.