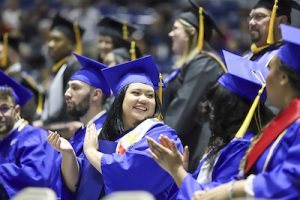 It may have seemed like the end of an educational journey to many of the graduates at Lander University’s 164th commencement ceremonies Wednesday (Dec. 15), but Dr. Jonathan Bassett said the day was the opportunity to begin a life with a “sense of meaning and purpose, derived from contributing to something bigger than oneself.” 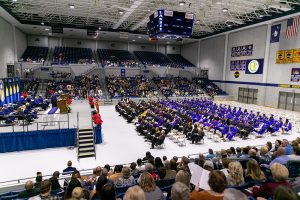 Bassett, a psychology professor and chair of Lander University’s Department of Psychological Science and Human Services, was the featured speaker at the 10 a.m. and 2 p.m. ceremonies in the Finis Horne Arena. Lander conferred bachelor’s and master’s degrees to about 250 graduates.

“Education is not a static thing. It is not an accumulation of terms, names, dates or facts … Education is a dynamic process of changing yourself and the world. This claim about the transformative power of education might sound naïve or overly optimistic, and perhaps it is, but it is a sentiment not unique to me,” he said.

For Labreshia Hill, of Abbeville, who received her degree in nursing, the day was “the end of a chapter and the beginning of a whole new book.”

Hill is starting her nursing career at Self Regional Medical Center as a labor and delivery nurse. She came to Lander because of the reputation of the University’s nursing program. “This has been a great place for me,” she said. “It was hard and challenging, but I got through it. It is a great day.”

Kade Bryant, of Starr, has been living in Colorado and working as an office assistant for a dental practice. He flew back to South Carolina for the ceremony “because I couldn’t deny my parents the chance to see me walk,” he said.

Bryant earned a bachelor’s degree in Business Administration from Lander in 2019 just before the COVID-19 pandemic began, and continued his studies online throughout the pandemic for a master’s degree in management. He hopes to teach at a community college “with the end goal of working in human resource management,” he said.

Attending Lander after turning down an opportunity to study at the University of Alabama “was the best decision I ever made,” he said. “Lander is home.”

Having a Lander degree, Bassett said, “is a signal to others of what you can do … in your time at Lander, you have worked hard and suffered and sacrificed for your degree, but your diploma is not a symbol of past trials endured, but rather it is a signal to the world of your current capacities.”

In calling on Lander’s Class of 2021 to “cultivate both a sense of awe and intellectual humility,” Bassett told the story of Holocaust survivor Sandor Teszler, who became the epitome of a commitment to lifelong learning. After World War II, Teszler emigrated from Hungary to America and came to South Carolina in 1960. He opened a racially integrated textile mill in King’s Mountain.

Although he achieved great success in business, Teszler audited some 50 classes at Wofford College and spent hours every day in the library reading biographies and weighty works of philosophy and history. He devoted his energies to learning “out of an intrinsic love of knowledge and an unquenchable curiosity,” Bassett said.

Exercise science graduates Sara Barker, of Rock Hill, and Diamond Gibson, of Sumter, have that same “unquenchable curiosity” and will continue on their own quests for learning. Each plans to attend graduate school next year – Barker to become a physician’s assistant and Gibson to become an occupational therapist.

Barker and Gibson have worked jobs at Publix in Greenwood while attending classes and pursuing a variety of campus interests. Yet, their employment didn’t affect their success in college, as proven by their Dean’s List honors.

Juggling school and her job in catering at Publix was “definitely hard … but I learned to manage my time,” said Barker, the first in her family to graduate from college. “I would plan out my schoolwork and studying time by my weekly schedule at work. Overall time management is key.”

Gibson, who is a customer service associate, said she met the demands of her life “by always staying organized … I made sure I always had enough days off to be able to study and complete assignments in a timely manner.”

That journey, Bassett said, begins with “skills and abilities you have acquired, and I implore you to use them for the greater good, to be active alumni who give back of their time and talents to Lander, to be involved community members, civic leaders, engaged citizens, and most importantly compassionate human beings.”