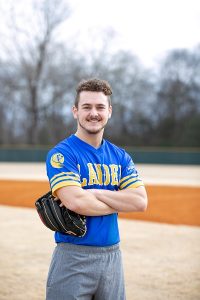 After working hard inside the classroom, senior public administration major Daniel Odom plays hard as an active member of Lander’s Club Baseball and Varsity Rugby teams. Odom says both organizations have contributed to his success at Lander University by helping him make “lifelong friends and memories.”

As an aspiring city administrator himself, Odom says he fell in love with Lander because of its close connection and proximity with the City of Greenwood. “I found the geographic environment that Lander is in to be extremely drawing,” said Odom. “I fell in love with the City of Greenwood and the combination of city retail and rural beauty, both of which can be found easily in Greenwood County.”

When he’s not on the ball field or enjoying all that Uptown Greenwood has to offer, Odom is preparing for his future career. In the summer of 2020, he interned for the finance office of the Alexander County (N.C.) School System, where he worked directly with the district’s C.F.O. In this position, he says he was able to put the principles into practice from courses such as “Public Budgeting” and “State and Local Government.”

Putting principles into practice is something Odom feels is unique to Lander University, pointing out that having the opportunity to learn, grow and lead were made possible through his Lander education. “Opportunity has been the theme of my college career,” said Odom. “There was always an open door for me at Lander. Both academically and athletically, Lander has opened many doors for me, and I will forever be grateful for the opportunities Lander gave me.”