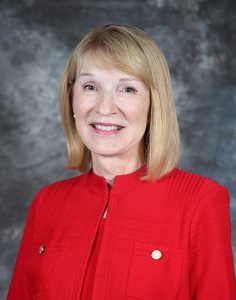 On Tuesday, October 4, 2022, the Lexington County School District One Board of Trustees unanimously selected Dr. Gerrita L. Postlewait to serve as superintendent. Dr. Postlewait, who has served as interim superintendent since July, replaces Dr. Gregory Little who accepted a role with the South Carolina Technical College System and resigned in June.

“I am honored to officially join such a dynamic school district,” said Dr. Postlewait. “I am excited to serve the students and staff, as we continue this important work.”

During the meeting, Board Chair Anne Marie Green read this statement on behalf of the board, “When the search began, we asked our community what qualifications and characteristics we should look for in our next superintendent.

Overwhelmingly, the Lexington District One family said they wanted a skilled communicator who demonstrates a strong background in curriculum and instruction and is committed to ensuring strong accountability toward student achievement results. Integrity, compassion, and clear, decisive leadership and vision were consistent themes.

Our students have urgent needs, and the board kept that urgency at the forefront of the search. Learning is back on track after the upheaval of the last few years, and we must have a leader who will strengthen our educational system at every level to maximize every second for each student in Lexington District One.

We appreciate the South Carolina School Board Association’s work that brought us an outstanding candidate pool, which made this decision extremely difficult. During the search, the board also received positive feedback regarding our interim superintendent, Dr. Postlewait.

The board is excited that Dr. Postlewait brings her vast experience in moving student achievement forward to Lexington One. She is a strong, knowledgeable, trustworthy leader, and we look forward to the success that students and staff will achieve as she leads our great school district.”

With more than 22 years of experience as a district leader, Dr. Postlewait most recently served as superintendent of the Charleston County School District for six years. During her tenure, she increased opportunities for family, staff and community participation through initiatives such as listening sessions held throughout the attendance zones and monthly meetings with staff, student and parent advisory councils.

In Horry County, she oversaw the implementation of the district’s 4-K and International Baccalaureate programs, as well as the opening of the Early College High School and two career academies. The district built several new schools during her tenure, and she led strategic planning.

Under Dr. Postlewait’s leadership, Wetzel County Schools moved from among the lowest in student achievement to one of the highest performing in the state, despite overwhelming poverty among families.  She also led a successful bond campaign which allowed the district to build and remodel numerous schools.

Prior to that, Dr. Postlewait taught various grades and served as a school administrator in multiple states, serving in urban, suburban and rural communities throughout her career. She also spent nine years in educational roles in the private sector.

She was assistant vice president for ACT Testing in Iowa City, Iowa from 2013–2015, as well as chief K-12 officer with The Stupski Foundation in California. In that role, she consulted with schools boards and superintendents nationwide to improve educational outcomes for children of poverty.