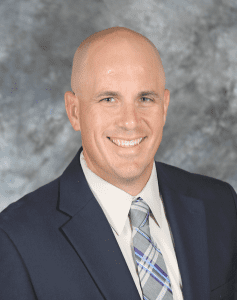 In 2003, he joined the Lexington One District One family as a secondary resource teacher at White Knoll High School. He also served as an assistant for the WKHS varsity football team and as junior varsity baseball coach. He was the occupational credentials instructor at WKHS from 2004–2006. In 2006, he became an assistant administrator at White Knoll Middle School.

In 2007, he was promoted to assistant principal at Gilbert High School, a role he held for seven years. As assistant principal, he oversaw disciplinary issues, facilities, technology, curriculum and scheduling. He also coached junior varsity baseball at GHS in 2008.

In 2014, Warren transitioned to Central Services and became the district’s student services coordinator. He conducted disciplinary hearings and oversaw the district’s drug-testing program. In 2015, he became the operations program manager. In this position, he facilitated large purchases, coordinated with design firms and contractors on building projects, and handled district growth plans and projections.

In his new role as operations director, Warren oversees the maintenance and facilities department as well as continuing his work with contractors, design firms and growth plans.

Warren holds certifications in secondary administration and educable and trainable mentally disabled. He is a member of the South Carolina Association of School Administrators and the Association for Curriculum and Supervision Development. He earned a Bachelor of Science in education from Presbyterian College in 2003 and a Master of educational administration from the University of South Carolina in 2007.