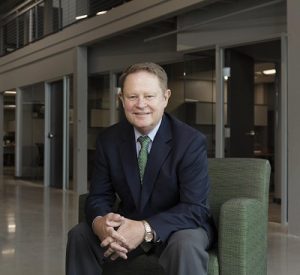 Following a long and distinguished career with McCrory Construction, Del Rosebrock, Chief Financial Officer (CFO), is looking forward to his next chapter: an active retirement spent with family and friends, while serving his church and the community. As an integral member of McCrory Construction’s executive leadership team for the past four decades, Rosebrock has helped grow and develop South Carolina’s oldest general contractor into one of the Southeast’s leading construction firms.

Allen Amsler, McCrory Construction’s Chief Executive Officer, applauded Rosebrock’s nearly 40 years of dedicated service, saying “Del is – and always will be – one of the most loyal and devoted employees in our 105-year history. A lot has happened in our industry and within our company during his tenure. Del helped guide us through two ownership transitions – the most recent being in 2020. Also, with Del’s help, McCrory has weathered three recessions and one pandemic. We thank him for all he’s done and sincerely wish him the best as he begins an exciting new phase in his life.”

While Rosebrock’s official retirement date was December 31, 2022, McCrory began preparing months earlier to ensure a smooth transition of responsibility for the company’s financial systems, accounting functions and financial reporting. After a thoughtfully planned search, McCrory welcomed Rosebrock’s replacement Katie Bogan, CPA, in July 2022, and the two worked alongside each other until the end of the year.

“Maintaining our company’s long-term financial stability is critical to McCrory’s continued strong and steady growth in the Carolinas and the surrounding region,” said Allen Bridgers, President of McCrory Construction. “Del has played a major role in developing and implementing our business strategy, but more importantly, he has set the highest standards for overseeing the planning, management, and monitoring of McCrory’s finances. Del’s legacy is further defined by his purposeful expansion of McCrory’s community service outreach program over the years.”

When Rosebrock, a CPA, joined McCrory as controller in 1983, he was new to the construction industry, having spent nearly 10 years in public accounting. He was later promoted to Vice President of Finance, and ultimately, Chief Financial Officer. Reflecting on the construction business over the past 40 years from a ‘then and now’ perspective, Rosebrock shared “The biggest change I have seen is in technology. The fundamentals of managing a project have not changed. Hopefully having more tools available has made us more efficient in managing client expectations for their projects. We are still a business built on relationships and we must never forget that.”

McCrory Construction, headquartered in Columbia, S.C., with an additional office in Greenville, S.C., is a full-service general contractor that has operated continuously since 1918. At 105 years old, McCrory is South Carolina’s oldest general contractor. Licensed in 13 states throughout the Southeast, McCrory has served an array of private and public sector clients through more than 3,000 general construction, design-build and construction management projects. Now under fifth generation private ownership, McCrory continues to be a leading force in retail, commercial, industrial, healthcare, and multi-family construction in the Southeast. Known for its people-focused culture, McCrory was named one of the Best Places to Work in South Carolina for 2022. To learn more, visit mccroryconstruction.com.